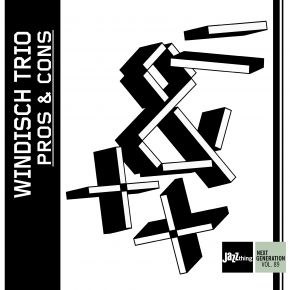 Julius Windisch, a Berliner by choice, certainly does not lack good reviews in the press. For example, London Jazz News wrote about his quartet's debut album: “The music is original, intricate and engrossing”, and Jazzcournal.co.uk seconded: “unpredictable and unobtrusive, the Windisch Quartet exhibits wildness and coolness in equal measures.” The magazine Concerto praised: “The pianist and composer steers his fellow musicians through jagged tunes with a broken-beat feeling […], but also shows his fragile side in the form of beautiful, melodic ballads, which are expanded by small sound gimmicks […].”

Julius Windisch's trio with Igor Spallati and Fermín Merlo, founded at the beginning of 2020, goes in a conceptually different direction, which his fantastic debut album Pros & Cons now presents. The impetus was given by a number of pieces that Windisch had already composed in 2019. “Their aesthetics were inspired by more traditional forms, composed harmonies, longer phrases, but also more room for improvisation. All this did not quite fit to the existing quartet and demanded a new line-up.” Windisch already had potential partners in mind. “I had already known Igor Spallati for a long time through his work in different bands. I was always impressed by how well he could fit into various contexts.” In contrast to the much-sought-after bassist, drummer Fermín Merlo was still regarded as a sort of insider tip in Berlin at the time. It was not until the end of 2018 that he moved from Buenos Aires to the German capital, with a recognizable approach to playing of his own. “Igor and Fermín are both strong personalities,” Windisch said, “rooted in jazz history on the one hand, but also extremely open to contemporary music and progressive jazz on the other. This makes them unusually flexible, and they also contribute many ideas for further development.”

Under Windisch's leadership, the trio generates new sparks from the popular format. The band leader's expressive play changes from poetic introversion to powerful expressions, leaving common voicing and phrases behind. His compositional creative drive is revealed in complex passages and clever details. For example, when he breaks out of the familiar meter of 4, blurs bar structures through harmony sequences (for example in Going For It and the optimistic Oknagut), intersperses rhythm changes, and maintains a lively, sometimes inspiring flow in all of this. The musicians consistently break up many old-fashioned hierarchies and play on equal footing. Their sound language also lets influences not connected with jazz, such as classical modernism, impressionism and minimalism, shine through. Windisch's compositions form springboards for subtle to gripping collective improvisations, in the course of which leadership roles are passed on seamlessly. Economical melodic and dynamic passages as well as individual tones (with the bowed bass and onomatopoetic drum pieces) create lyrical moods and energetic fields of tension.

Julius Windisch composed the repertoire of Pros & Cons over a period of approx. 10 months. Corona almost inevitably left traces in it. Specifically, End Of May with its latently agitated, resistant to melancholic atmosphere as well as the initially dreamy, then lustfully free-playing De Rona are direct reactions to the pandemic. On the other hand, the somewhat contemplative title track “was created in a time of several decision-making processes” and reflects Windisch's natural ability to maintain many balanced considerations – even beyond music. Last year, he was one of the first artists to publicly protest the speech by the populist historian Daniele Ganser at the Jazztage Dresden 2020. Nie aufhören was composed in Copenhagen in 2019 and was inspired on the one hand by impressions during a semester at the Rytmisk Music Conservatory. On the other hand, it reflects Windisch's inner constitution, since he was struggling to overcome a personal low at the time. “In general, I want my pieces to capture moods of something that has touched me very much.” This something can also be a co-musician, especially the Cologne-based Leif Berger. He was the source of inspiration for the album's eight-and-a-half-minute longest work, which skillfully undergoes several transformations, from contemplative to open to groove passages. It is certainly thanks to these emotional aspects that Windisch's compositions always sound alive with all their refinement.

On March 9, 2020, just a few days before the first lockdown, the Windisch Trio played live in Berlin, and a second concert took place shortly before the studio date in September. To prepare the recordings, intensive rehearsals took place within four weeks, which immediately paid off. “We had a good live atmosphere in the studio and were able to record most of it on the first day,” Windisch said. No doubt an additional proof of the remarkable intuitive understanding within the band.

With Pros & Cons, the Windisch Trio presents a variable, melodically and rhythmically exciting debut. Without words, the independent pieces convey feelings and emotional situations, completely in the sense of Julius Windisch, who prefers to listen to music that “affects me emotionally.” The personal sound language of the three musicians and their impressive oscillation between transparency and compression create mesmerizing moments and generate distinctive sparks from the piano trio format.


Julius Windisch was born in Stuttgart on Sept. 7, 1995 and grew up in Offenburg. He studied at the University of the Arts, Bern, in 2014-2017, among others under Django Bates, Manuel Bärtsch and Colin Vallon. In 2017-2019, he studied in the European Jazz Master program at Rytmisk Music Conservatory, Copenhagen. In 2015 and 2016, Windisch was a fellow of the Lyra Stiftung Zurich. He received further funding from: Musikfonds, Schweizer Interpretenstiftung, Foundation SUISA, Kultur Stadt Bern and Canton Bern. He has played with Peter Bruun, Kresten Osgood, Philipp Gropper, Bernhard Meyer, Tristan Renfrow and others.

Fermin Merlo was born in Buenos Aires on April 28, 1992. The son of a double bass professor, he was a child prodigy and an active part of the metropolitan scene for a decade. He played with various projects in the most important clubs and festivals in South America. Merlo also toured internationally in bands with Tim Berne, Tony Malaby, Leo Genovese, Ralph Alessi, Mike Moreno and John Hollenbeck. Since his arrival in Berlin, he has worked with Elias Stemeseder, Uli Kempendorff, Johannes Fink, Felix Henkelhausen and others.

Igor Spallati was born on August 16,1985 and grew up in Perugia. He studied there until 2009 at the Conservatorio di musica and then at the UdK (Jazzinstitut) Berlin. Since then, he has played in stylistically diverse projects, such as Silke Eberhard’s Potsa Lotsa XL, Musina Ebobissé Quintet (nominated for the German Jazz Prize 2021), Simon Kanzler's Talking Hands and the Wolfgang Schmidtke Orchestra. He has also participated in various recordings, such as Anna Webber's Percussive Mechanics (with Elias Stemeseder, Max Andrzejewski, James Wylie et al.; Pirouet Records) and Benjamin Schaefer's Hive Mind (with Frank Wingold and Jonas Burgwinkel).