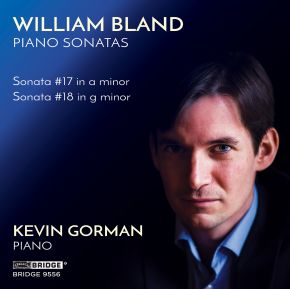 --------------------
William Bland’s cycle of 24 piano sonatas, one in each of the major and minor keys, was composed between the years 1998 and 2014. Since the completion of the cycle, some of the earlier sonatas have been revised, and in some cases recomposed. The initial composition of the 24 sonatas filled 431 pages in Bland’s small, finely rendered manuscript. The cycle is the West Virginia-born composer’s magnum opus, and is a summation of an extraordinarily wide range of cultural influences. Only a handful of the sonatas have been performed to date, most notably by Bland, and by the American pianists David Holzman and Kevin Gorman. The composer’s own 4 2007 performances of Sonata #4 in E-flat Major - Four “Goodbye” Concert Rags, and Sonata #14 in B-flat Major (BRIDGE 9223) were the only recordings from the cycle before the appearance of the present disc. All of Bland’s 24 sonatas are relatively large-scale works, written utilizing schemes of 4, 5 or 6 movements, The composer writes that “the individual motivation for each sonata varied, including visual imagery, literature, and just pure music.” Bland has also spoken of how isolated he was during the years of composition, and how during that time, his readings of history and poetry inevitably “found transformed expression in the emotions of the sonatas.” Whatever else one will say about these sonatas, they can not be accused of being ‘unemotional’. The musical content of the sonatas merges strains of the simple and complex, popular and classical, romantic and modernist. They employ both diatonic and atonal language interwoven freely, and throughout, transform their materials with dynamism and textural variety, frequently employing a whirling and propulsive keyboard style. Dance rhythms and dance styles are prominent. Over the course of the cycle we encounter concert waltzes, a tango, fast and 5 slow rags, a Charleston, a funeral march, chaconnes, rap, disco, a movement with metronome, and much more. Kevin Gorman writes: “the essence of these sonatas is not forms or techniques, but passion, which beckons me as a pianist to reciprocate the intensity with which these originally had been composed.” It remains for this and future generations of pianists to fully reveal the content of these large and intricate scores to a wider public. Their blend of sincerity and directness of expression, ecstatic physicality, and compositional craft, add a substantial chapter to the instrument’s unparalleled solo canon.