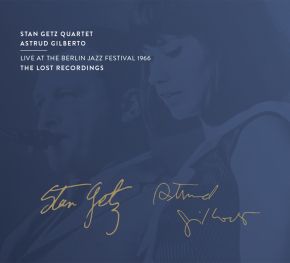 Live At The Berlin Jazz Festival 1966

The Lost Recordings found the master tapes of this double recital in the Berlin radio archives. How can one not be transported by this concert, which delivers a previously unreleased version of the tracks from the legendary 1964 album on Verve? The label is offering the world premiere of this concert recorded at the Berlin Philharmonic, as part of the 1966 Berliner Jazztage. The 19 tracks of this now unforgettable concert are added to the collection with, as always, an unequalled sound quality, thanks to the Phoenix Mastering® process

The concert given by Stan Getz's quartet with Astrud Gilberto on November 4, 1966, was a sort of contretemps. In these crazy years when everything is rushing, things have indeed changed in the lives and careers of the two main protagonists who, after a fleeting romance, have each regained their personal and artistic independence.

After a brief romantic idyll together, each one returned to their private lives and resumed their independence as artists. Verve had brought out a series of albums by Astrud Gilberto where seductive easy listening intermingled with cool jazz, sentimental pop and languid Brazilian groove. She was at the very pinnacle of her fame, while Getz had made a remarkable comeback to jazz. Once again, he worked with arranger Eddie Sauter, this time on the soundtrack of Arthur Penn’s Mickey One. Even more noteworthy was his discovery of vibraphonist Gary Burton, barely twenty years old, the ideal musician with whom to form a regular jazz quartet with Gene Cherico on bass and Joe Hunt on drums. It was an ensemble that was receptive to new sounds and harmonic ventures.

The opening bars of “Samba de Uma Nota só” instantaneously wrought the magic of the reunion. As if time had stood still, the hesitant fragility of Astrud’s voice against the foggy, iridescent sounds of Gary Burton’s vibraphone, amplified by the airy countermelody of Getz’s saxophone, recreated all the freshness and innocence of the legendary recording of 1964.

In an astutely compiled suite of bossa nova standards (“Você e eu” by Gilberto Gil, “Corcovado” and “The Girl from Ipanema” by Jobim) combined with compositions that were jazzier in both form and spirit (“Jive Hoot” de Bob Brookmeyer and the sentimental standards “The Shadow of your Smile” and “It Might As Well Be Spring”) Astrud Gilberto and Stan Getz perform with restraint yet communicate their joy of playing together. Instead of giving the impression of a return to the past, they give life to this sensual, melancholic music as if they were falling in love with the offspring of their respective musical passion.

Stan Getz (artist)More information
Gary Burton (artist)More information
Chuck Israels (artist)More information
Roy Haynes (artist)More information
Various (composer)More information
Astrud Gilberto (featured)More information
13-10-2021 Kultkomplott
"... Getz, on the other hand, is in top form, pulling out all the stops of his wonderfully lyrical playing, ripping into the exotic melodies, playing around them, improvising with a smoky smoothness and his fluid phrasing style, making almost every one of these nineteen tracks in all a little sparkling gem..."
30-09-2021 Musikansich
"... Seen in this way, the use of Getz is taken back accordingly and together they created an atmosphere full of sensuality and partly great melancholy, with breathed saxophone sounds, which sometimes remind of Ben Webster..."
23-09-2021 Jazzfun
"... For most jazz lovers there is probably no doubt that Stan Getz was a genius on the saxophone. This album is a meeting of the highest level: Gary Burton on vibraphone, a perfect rhythm section led by Roy Haynes and the beautiful voice of Astrud Gilberto. This album shows how great they could play, what incredible feeling, creativity and sound strength they had, which can be heard in all tracks with different intensity.

12-09-2021 nrwjazz
"The Lost Recordings label has once again unearthed a treasure: Stan Getz's 1966 concert at the Berlin Jazz Festival with a top-class band...

25-08-2021 Jazzthing
"The Verve album "Getz/Gilberto" in 1964 made not only the Brazilian bossanova popular, but also the singer Astrud Gilberto, who gave "The Girl From Ipanema" on it, world famous..."
WDR
"... And it is precisely this mixture that makes this recording so appealing, sounding unspent and timeless in its lightness, coolness and transparency even after all these years."
VirginJazzFace
"Live at the Berlin Jazz Festival 1966 consists of master tapes of a double concert by the Stan Getz Quartet & Astrud Gilberto with previously unreleased versions, sonically very well remastered..."