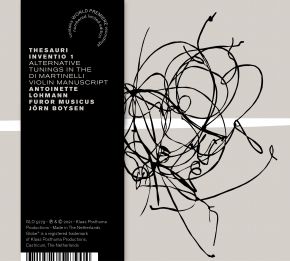 Thesauri inventio 1 & 2 is in fact two albums in one 2CD digipack, one featuring music from the Di Martinelli Music Collection and other from the Kroměříž Music Collection. In the late 17th and early 18th centuries, numerous music compilations appeared that gather together handwritten copies of all sorts of repertoire. This was cheaper than printing music or purchasing printed editions. Many compilations were intended for internal or local use and often included works of composers who were locally active. Today, they also give us insight into the popularity and distribution of composers and their oeuvres during a specific period.

Both the Di Martinelli and Kroměříž archives contain a surprisingly large amount of repertoire for violin and continuo, some of which remains unexplored up to the present day.

This double album was made during the coronavirus lockdowns in 2020 and 2021, that presented the musicians with a rare opportunity: they now had the time to uninterruptedly devote themselves to investigating a number of exciting finds from the Kroměříž and Di Martinelli Archives and even record them. The undertaking would otherwise have taken them years to achieve. One musical discovery led to another and each successive lockdown provided them with the gift of more time to dedicate to the project. What initially began as a plan to record a single CD ultimately resulted in the creation of this double album. Thus, both the repertoire and the time proved to be a treasure trove, a Thesauri inventio.