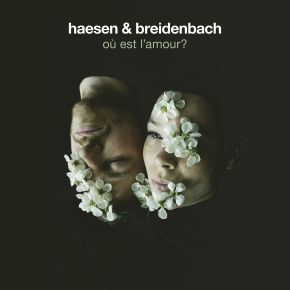 The Cologne based Haesen & Breidenbach is a jazz / chansons françaises duo consisting of vocalist Charlotte Haesen and guitarist Philip Breidenbach. Together they effortlessly combine jazz, indie-folk and other musical influences from all over the world into their own heart felt and authentic sound. Haesen & Breidenbach continue to perfect their ability to compose mind bending music and taking their listeners on an unexplored musical journey around the world. Knowing each other for more than fifteen years, it is only in 2019 that Haesen & Breidenbach join forces and start writing music as a duo. The two composers find inspiration in the story telling aspect of music and the cultural baggage it carries. Their first EP ‘Autour du monde’ was released in May 2019 followed by a single to be released in October 2020 and an album in the autumn of 2021 on Challenge Records international.

With her crystal clear voice, Charlotte Haesen (born 1987) has already won several prizes, including the "Eu Jazz Award" or the "Concours de la Chanson" of the Alliance Française. In 2010 she completed her jazz vocal studies at the Conservatory of Amsterdam. The german radio station Bayerischer Rundfunk named her last CD "Du bout des yeux" one of the most interesting albums of 2018. Today the international press calls her the "(...) future glimmer of hope for jazz from this region" (- JAZZISM)

Philip Breidenbach (born 1985) starts playing the guitar at the age of eight and graduated from the Maastricht Conservatory in jazz guitar in 2009. To this day he has worked as a guitarist, composer and producer on more than 30 CD productions of various genres and travels the world as a performing musician.

Philip Breidenbach (composer)More information
24-12-2021 Nieuwe Noten
"
Atmospheric guitar playing, perfectly supporting her vocals, nice modest percussion that gives body to the pieces, it makes this a pleasant album.
"
06-12-2021 Musikansich
"... Another jewel for me is "Alishan" composed by Gu Jiahui and Kin Qin Lán Shi, wonderful, this Asian flair, and here Charlotte Haesen proves how much emotional expression she has in her voice. All in all a wonderfully relaxing and decelerating album on a very high level!"
19-11-2021 nrwjazz net
"... create small, pretty individual sounding song pearls, in which one dives only too gladly."
19-11-2021 virgin jazz face
"... pursue their search for love in an area of tension between jazz, chanson and indie folk in four
languages ..."

08-11-2021 jazzfun
"Those who know the previous successes of the two artists, I do not need to encourage to listen to this album. Those who know them less, I recommend to make a cup of good coffee, cover yourself with a warm blanket and play this album. It's worth it, it's great!"
01-11-2021 Jazzthing
"... où est l'amour? is a little song wonder that captivates with its charm and originality."
01-10-2021 Rootstime
"The album starts with the cheerfully hopping “Danse avec moi”, in which it immediately becomes clear what a great guitarist Philip is. In “Qui protège les marins ?” I again notice the quicksilver vocals of Charlotte, which also sounded so pleasant to my ears with Café des chansons."