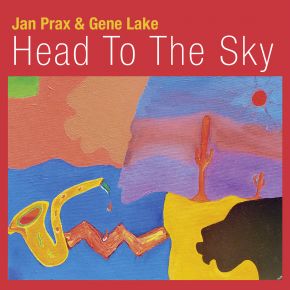 Head to the Sky

If you write "Swagg" with double-G, you have to be quite funky in your endeavors. This is the case in the meeting of the German exceptional saxophonist Jan Prax with the American drummer Gene Lake. The contact was made by a famous co-musician of Prax. “At the Leverkusen Jazz Days, I caught the attention of David Sanborn and he asked me repeatedly to play alongside him,” he recalled. "At some point, he recommended me to Gene Lake and that's how we met."

Sanborn is reputed to have said “You are so young, I hate you;” about his young German co-musician, which was clearly meant as a compliment. After that, Prax released two CDs with his own band, “Keepin’ A Style Alive” on ACT and “Ascending” on Challenge, which were very well received by both the press and audiences. But “Head To The Sky” doesn't have much to do with this hardbop music anymore. "In 2018 I flew to New York and – in Gene’s home studio – we tried out which pieces could work," Prax said. “We worked out ideas and composed songs.”

And they are clearly groove-oriented. Gene Lake is a drummer who authentically embodies this tradition. However, the son of the avant-garde saxophonist Oliver Lake has already played in many different kinds of projects. The drummer played for fusion giants like Joe Zawinul and Marcus Miller, but also with avant-garde artists like Steve Coleman and Henry Threadgill and soul and R&B musicians such as Maxwell and Boz Scaggs. And that is exactly what Jan Prax wanted to build on.

"In recent years, I've been working on finding an authentic way to play groove music, because I honestly think it's just great," he said. "I really had to try a lot of things out, so that it doesn't just sound like you're playing over such music as a jazz musician." The result sounds pretty exciting. The way Prax moves in this cosmos of dry beats, nasty keyboard sounds and juicy guitar licks is impressive. “Timing plays a big role,” he stated. “You have to be able to play more with the beat. You can't just play over it, you really have to log in and play with the beat. If you don't have really strong timing, it doesn't sound right and convincing. It's a completely different way of doing things.”

The eight tracks of the album are mainly carried by an enormous amount of force, which Lake always cleverly designed and into which Prax can fully link. "I was familiar with Gene Lake from many records,” the saxophonist stated. “On the records of Meshell Ndegeocello and Maxwell, for example, he plays a decisive role. Of course, he's an incredible drummer, but what shocked me even more is that he plays e-bass at exactly the same level. He also produces at an incredible level. It was great to work with someone who incorporates so much of the tradition.” Therefore, the two did not need a bass player, but five guest musicians contribute to the diversity and variety of the music. They are the keyboarders Ricky Peterson and Frederico Gonzales Peña as well as three guitarists Mark Bowers, Nicky Moroch and Paul Pesco. “We recorded in two phases in New York,” Jan recounted. “Then I recorded the last tracks in Karlsruhe. The other guys recorded in their respective home studios in the USA.”
Between the groovy songs, Prax and Lake have also incorporated a few moments of relaxation, the most beautiful of which is probably the title song, which the two protagonists composed together. "I particularly like 'Head to the Sky‘ because it creates such a super mood," Prax stated. “It sounds particularly good with the acoustic guitars.”