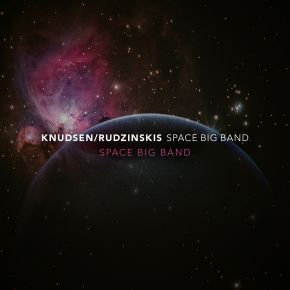 Space, endless expanses: these are the adventures of the Space Big Band, who travel with a team of seventeen to places that no big band has ever seen before. Space Big Band was named by Danish bassist Kenneth Dahl Knudsen and Latvian saxophonist Toms Rudzinskis. The two got to know each other in Berlin. They hit it off musically and decided to form a band together. Both Knudsen and Rudzinskis had worked for big bands in the past and found that there was a lack of modern, contemporary compositions for such large ensembles. With a host of friends, excellent musicians from Germany, Denmark, Latvia, the USA, Russia, Ukraine, France, Sweden and Austria, they got the project going. The result is the first “Space Big Band” album.

The term “space” has a double meaning. Of course, first of all outer space is meant and the history of its exploration. The two bandleaders, who each composed five pieces for the album, include references to inspirations from Galileo to Hawking, early geology and the origin of the earth, Johannes Kepler and the frequencies of planets, but also to current space missions and the history of our knowledge of the cosmos. But there is also “space” in music. It needs space, space for improvisation and collective music-making, as is typical for a contemporary jazz orchestra. The song titles usually make it clear from where the respective piece draws its inspiration. Both composers studied and researched their subject areas, but the songs do not tell unambiguous stories.

The five compositions by Kenneth Dahl Knudsen deal with the unimaginable vastness of space and its planets, occasionally touch land and finally move toward Mars: Dark Ages, Before Time, Phobos and Deimos, Terra, Arrival to Mars. The five compositions by Toms Rudzinskis are more about the origin of the earth and geological eras, about expansion and supercontinents until the origin of living beings and the soul: Hades, Permia, Vaalbara, Orsa, Anima. The music is suspenseful and versatile; it relies just as much on the power of a big band as on the extraordinary abilities of its soloists. The electro-acoustic ensemble has many possibilities to play out its strengths: From the sustained soundscapes in "Permia" to the nervous radiance of the opener "Orsa" and all the way to the futuristic playground "Arrival to Mars". It quickly becomes clear that the different strengths of the two bandleaders in the Space Big Band combine in an ideal way. While Kenneth Dahl Knudsen focuses on rhythm – he has been dealing with complex rhythms and polyrhythms in his work for a long time – Toms Rudzinskis is a melodic powerhouse. Together they combine the exploration of the cold, unknown and yet to be discovered or already conquered space with the emergence of the living and breathing earth, which is located in the middle of it.
Toms Rudzinskis is one of the leading Baltic jazz saxophonists, who has often been accredited with an innovative and unique sound. He is the head of his own quintet ABYSS as well as other bands, but is also active as a sideman. He currently lives in Berlin.
Kenneth Dahl Knudsen is a Danish bassist who has released five albums under his own name since 2010 and has won numerous prizes. He is always looking for new ways to play music and collaborate with others. Both musicians are happy that they have found a place on Double Moon Records with the Space Big Band: That can’t be a coincidence!

Knudsen/Rudzinskis Space Big Band (artist)More information
Toms Rudzinskis (composer)More information
Kenneth Dahl Knudsen (composer)More information
Toms Rudzinskis (featured)More information
Kenneth Dahl Knudsen (featured)More information
23-03-2022 Jazzthing
"... There are then many original, lustfully polyphonic ideas to hear, abstract n constructions, which do justice to the cosmic specification by all means... "
01-02-2022 Concerto, Austria
"... There is still plenty of room for modern big bands in the contemporary jazz scene. Knudsen / Rudzinski and the Space Big Band are able to fill it excellently with their debut."
23-12-2021 Na Dann
"
Brilliant when it comes to speed, remarkably beautiful when it gets lyrical.
"
11-10-2021 Nach-Welt
"... Toms Rudzinskis is one of the most innovative jazz composers and performers in the Baltics..."
jazzfun
"... Each composition captivates with sophisticated harmony, excellent direction, arrangements and great solos. A great idea for an album, realized with a truly impressive result."
Lufthansa airplay 3 month
"The large international formation led by Danish bassist Kenneth D. Knudsen and Latvian saxophonist Toms Rudzinskis presents a space-inspired jazz suite with groovy sounds."