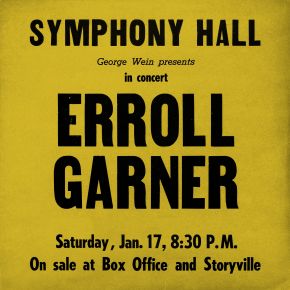 On January 17, 1959, jazz immortal Erroll Garner took the stage of Boston’s Symphony Hall for a historic performance to a sold-out crowd. Recorded 11 months prior to the Dreamstreet sessions, which heralded Garner’s return after a lengthy battle for control over his catalog, Symphony Hall Concert is a previously unreleased compilation capturing the unparalleled genius of Garner’s live performances at the beginning of one of the most defining years of his life.Symphony Hall Concert (Single LP/CD/digital) ● Previously unreleased 9-song compilation recorded live at Boston’s Symphony Hall in 1959 ● Concert originally presented by famed promoter George Wein ● Exclusive cover based on poster from Erroll Garner archive.

Erroll Garner (artist)More information
Erroll Garner (composer)More information
Kelly Martin (featured)More information
Eddie Calhoun (featured)More information
16-12-2021 Jazzmania
"
the single cd covering nine pieces from the Boston concert, is already a marvel.
"
15-12-2021 KultKomplott
"
A full, rich piano sound, peppered with ideas and twists, swinging throughout and still full of poetry even in the high-speed moments
"
10-12-2021 Jazzism
"
His intros were famous, a run-up that first frolicked around in the area and at a surprising moment arrived at the piece to be played.
"
06-12-2021 Jazzhalo
"
fabulous intros, surprisingly ornate improvisations, using the eighty-eight keys of the keyboard, an unstoppable swing.
"