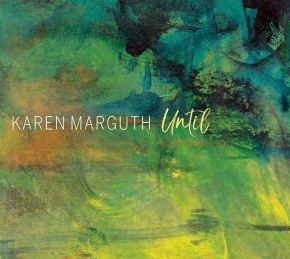 Based in the East Bay, vocalist Karen Marguth found her calling in jazz while living in Fresno, CA through the early 2000s. California’s Central Valley sustains a surprisingly thriving jazz community and it was there that Marguth earned national renown with her four jazz albums, featuring the tight circle of musicians she surrounded herself with. Until features her interaction with two Fresno groups, along with a third, representing her latest collaborators from the Bay Area. Though presenting three distinct ensembles on an array of material recorded over the last decade, the album is remarkably cohesive and brimming with emotional generosity. From the strutting arrangement of "Comes Love," to the shimmering title tune from Paul Simon's 1983 release, "Hearts & Bones," or the closing, intimate duo rendition of "Days of Wine & Roses," Marguth shows an uncanny ability to mine hidden gems that others miss, while creating a warm & creative environment for her bandmates to thrive in. An artist who’s still stretching her wings, she adds another consistently captivating chapter to her discography with Until.