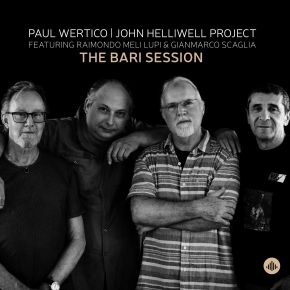 I can’t begin to adequately express how excited I am to have our first official studio recording, THE BARI SESSION, finally released!
Ever since the very first time John, Raimondo, Gianmarco and I played together back in 2008, I’ve loved this band and knew we had that “special chemistry” that truly makes a band: A BAND.

However, since then, our only release thus far has been a double-CD entitled LIVE UNDER ITALIAN SKIES that features performances from two live concerts in 2008 & 2012. Due to our extremely busy individual schedules, and the fact that the four of us live in three different countries on two different continents, we’ve never quite found the ideal time and opportunity to actually go into a recording studio to officially document our band’s sound, its chemistry, and some of the songs that have become part of our standard repertoire in live concerts.

Well, THE BARI SESSION has now arrived and it beautifully showcases all of those things (as well as some new compositions), because in August of 2019 we were able to find a small window of time to go in and record in a fantastic studio in Bari with a first-rate engineer during one of our Italian tours. I believe the result speaks for itself. We also had a really wonderful experience making this recording and the music just seemed to “play itself,” which is always a great sign that the music is “ready” and “cooked to perfection,” just like the best Italian dishes! Godetevi un buon ascolto!
Paul Wertico

In 2019, I was working on my album “Ever Open Door” with Andy Scott, the arranger and composer. We decided to co-write a tune. Originally, the album’s title was to have been “When I Was Young” which is the first line of the lyrics from the Supertramp song “The Logical Song”.
The next line in that song is “…It Seemed That Life Was So Wonderful” — so as it represents my general outlook on life, it felt like an appropriate title for a new tune. Very shortly afterwards, I toured Italy with Paul, Raimondo and Gianmarco where we included this tune in our performances.
I am honoured that it was included in our MAST Studio session in Bari during this tour.
John Helliwell

A fundamental aspect of this recording session in Bari was to put at the service of every musician each one's musical personality.
I can assert that we strongly listened to each other, taking ideas from each other, forming a sound path of interplay and dynamics that fluctuate from Raimondo’s mainstream rock excursions (as I define them), to Paul's dynamic grooves and John's melodies.
“Good the first take!” has been an essential element of the whole project.
Gianmarco Scaglia

A “dream that comes true” is what comes to mind when I think about The Bari Session.
Having the chance to record with some of the most influential musicians of my life has not only been a great honour, but one of those “once in a lifetime” situations that you almost do not believe could happen to you! Since the quartet started collaborating in 2008, it has been a magical chemistry, even if we do not get the chance to play often. It is chemistry on both musicianship and human levels. I think the listener can realize that magic in the grooves of this recording, which came to life in a day-off during our short tour in Italy in the summer of 2019. All tracks are the first take and we recorded all in one day at MAST Music Academy Recording Studio in Bari with excellent sound engineer Massimo Stano. For the recording session, we used an analog mixing console, the SSL 4048 G SERIES, which is an iconic studio classic. The session was then mixed at Fonoprint Studios in Bologna on another iconic analog board: the SSL 4064 G SERIES. Even more iconic is the mixing engineer Maurizio Biancani: his talent, knowledge and musical taste have been essential to the project. I am very proud of this work and I consider it to be one of the highlights of my career, both as a musician and a producer.
Raimondo Meli Lupi

Are there streaming options?

The players have collaborated since 2008, so there is real chemistry in an album full of diversity and superb playing. Hugely enjoyable.

"
04-01-2022 Musikansich
"19 out of 20 points: High-flyer
... Brilliant here, as in general, the drum work of Wertico, and in general the dense interplay of all actors. Finally, it remains for me to state that every song on the album Bari Sessions is my favorite."

03-01-2022 Music Emotion
"
The Bari Sessons has become an energetic album. High class here.
"
10-12-2021 Jazzmania
"
There is a lot of pleasure in this music, we listen to it without noticing the time passing ... We even find ourselves humming the melodies that quickly stick to the ear.
"
02-12-2021 Na Dann
"... They listen to each other very well, adopt and vary each other's ideas, give each other enough space and develop lyrical moments, grooves and positive moods out of interplay and dynamics."
02-12-2021 Japan Jazz
"Japanese review"
28-11-2021 nrwjazznet
"... Together with saxophonist and ex-Supertramp John Helliwell, guitarist Raimondo Meli Lupi and bassist Gianmarco Scaglia, the longtime drummer with Pat Metheny (Paul Wertico) has recorded a modern, timeless jazz album between fine jazz rock, atmospheric moments and blues."
28-11-2021 virginjazzface
"... Paul Wertico: The Bari Session (Challenge Records) is the first official studio recording of the Paul Wertico ǀ John Helliwell Project..."
25-11-2021 Rootstime
"
an atmospheric composition that evokes a musical dream world
"
25-11-2021 Jazzfun
"Among the seven pieces of the album there is not a single one that is incomplete, underdeveloped or uninteresting. All improvised parts captivate with freshness and interesting ideas. Also the great sound of this album should be especially appreciated. Congratulations!"
22-11-2021 NDR CD of the week
"... Four musicians who take their time and calm for their pieces and explore the topics very carefully. And then stage the whole thing with great love for the sound: This "Bari Session" is one of the best jazz albums of this year in terms of sound. One can play jazz more excited, also trendier or more radical. But hardly better - and above all better documented..."
10-11-2021 Jazzhalo
"
There is a lot of pleasure in this music that we listen to without caring about time going by
"
27-10-2021 Jazzthing
"... The musical palette of the international foursome ranges from modern-jazz delicacies like "Cowboys & Africans", which was strongly inspired by African rhythms, to the elegantly casual "Train Bossa" and a floating, light-footed affair like the opener "Circular Motion"..."