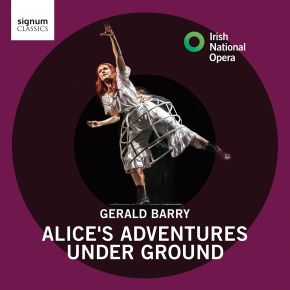 Irish National Opera is Ireland’s newest and most enterprising opera company. It champions Irish creativity in its casting, its choice of creative teams and in its commitment to the presentation of new operas. The company has performed large-scale productions of works from the great operatic canon by Mozart, Verdi, Puccini and Rossini in the Gaiety and Bord Gáis Energy theatres in Dublin, the National Opera House in Wexford and Cork Opera House. It has also taken touring productions of works by Thomas Adès, Offenbach, Gluck and Vivaldi — the first ever production of a Vivaldi opera in Ireland — to venues in all parts of the country. INO was formed in January 2018 through the merger of two award-winning companies, Opera Theatre Company and Wide Open Opera.

The two companies joined forces  in 2017 in response to an Arts Council initiative, and have delivered Ireland its first ever truly national opera company. In its first 24 months of operation Irish National Opera produced 72 performances of 14 different operas in 24 Irish venues,
and its long-term target is to visit over 20 Irish venues annually. INO is committed to taking Irish opera productions abroad. Its FEDORA–Generali Prize winning production of Donnacha Dennehy and Enda Walsh’s The Second Violinist, a co-production with Landmark Productions, has been seen in Galway, Dublin, London and Amsterdam. INO’s 20 Shots of Opera, 20 short operas that were conceived, composed, recorded and filmed in just six months, showcase the breadth and depth of Irish operatic talent. The project was praised in The Wall Street Journal as “an exhilarating jaunt through up-to-the-minute creativity” and is available to watch online on irishnationalopera.ie and on operavision.eu. Also available to view online is Mozart’s Seraglio mini-series, Rossini’s The Barber of Seville, Handel’s Acis and Galatea and the company’s inaugural Gala Concert The Big Bang!. In addition to livestreamed and on-demand offerings, the company responded to restrictions on indoor audiences by presenting work ‘Beyond the stage’. This includes site-specific outdoor performances of Strauss’s Elektra in Kilkenny Arts Festival, street-art operas, outdoor film screenings of Maxwell Davis’s The Lighthouse in iconic locations including Hook Head Wexford, Valentia Island and Fanad Head, and creating the first virtual reality community opera Out of the Ordinary, which won the FEDORA

Digital Prize in June 2021. The ABL Aviation Opera Studio provides a platform for emerging opera artists in several disciplines. Studio members gave the much-praised world premiere of Evangelia Rigaki’s This Hostel Life in the crypt of Dublin’s Christ Church Cathedral last September, and they also presented the free, introductory show, The Deadly World of Opera, as part of Dublin City Council’s MusicTown festival. INO is a member of Opera Europa, FEDORA, and is an Operavision partner. Funded by the Arts Council