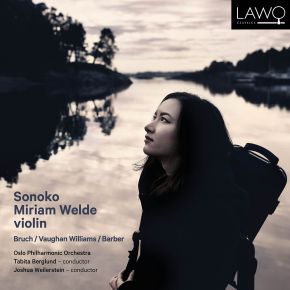 When you ask people which superpower they would choose if they could have only one, many answer that they would want the power of flight. Although I personally would prefer invisibility, I also think there is something enviable about the freedom of being able to fly, to soar through the sky, above all the stress and troubles of life down on the ground. A lot has been said and written about how Vaughan Williams wrote The Lark Ascending during the 1st World War “when a pastoral scene of a singing bird on the wing seemed far removed from reality” (Betsy Schwarm, Britannica). I sometimes imagine people living through difficult times looking up at the lark, envying its life and freedom that they wish they had. It's a moving piece with soaring melodies and the lark's “silver chain of sound” (George Meredith's poem The Lark Ascending).

Soaring melodies are present in Barber's Concerto as well. Although it opens with a generous and warm melody, it doesn't take long for uncertainty to creep in, and large sections of the 1st movement are dominated by an “in-between” kind of feeling – in addition to the unbelievably triumphant and satisfying return of the opening theme of course! The 2nd movement is, for me, one of the most touching and heartbreaking pieces of music. It reminds me of Somewhere from West Side Story. Hope, pain and perhaps longing for something better. It is just endlessly beautiful... The first two movements of the concerto are emotionally and dramatically linked in that they both have short solo violin cadenzas towards the end. The two are very similar to each other – very tense and devastating, like an existential cry. They are followed by a bizarre, disturbing, entertaining and adrenaline-inducing 3rd movement to end the piece. In a way it makes no sense to end this way, but that's part of the fun of it.

Bruch's Violin Concerto is a piece with its heart on its sleeve. The 1st movement is a very serious and dramatic introduction, the 2nd incredibly touching and sincere, and the 3rd so joyous and life affirming. This piece has accompanied me in many important and special moments in my life so far and I am so happy that it is with me in this one as well – my debut album with the Oslo Philharmonic, a fantastic group of musicians that I have loved and admired for many years!

Here is my new discovery. I am so happy and touched by the Max Bruch violin concerto she played, for her soft sound that is full of emotion and hope. I don't know why but I can associate hope with her playing. She radiates this feeling out of her, a hope for our tumultuous pandemic times. I love her violin playing quite well. Here is a real beauty for music born. Thank you for your music.

Just heard (16th November 2021) this version of The Lark Ascending played on Classic FM - Superb! - It brought tears to my eyes!

Oslo Philharmonic Orchestra (orchestra)More information
05-11-2021 Katholiek Nieuwsblad
"
impressed by the warmth of the tones on the e-string. High tones on this string often sound tinny and bare. The latter is of course also prevented if you play like Welde on a beautiful violin by Alessandro Gagliano from 1714
"