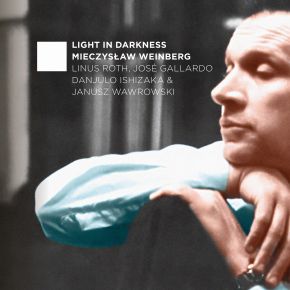 Linus Roth first encountered the music of Mieczysław Weinberg (1919-1996) in 2010 when he was scheduled to play his Piano Trio at a chamber music festival. After the first rehearsal, Roth was shocked and moved by the intensity and energy of the music and touched by the beauty of this composition, which was new to him. Not only were the characteristics of the inner turmoil obvious - , the deep abysses and darkness in this music - but also those of the hope contained therein, which repeatedly shone through. At the time Roth knew almost nothing about Weinberg’s biography or any of his other works, so he left the festival in the hope that Weinberg may have composed something else for violin.

It was then that a treasure chest opened up for Roth: a Violin Concerto with symphony orchestra and one with chamber orchestra, 3 solo Sonatas, 7 Sonatas with piano, many other pieces and a number of chamber music works. Much of it had never been recorded and Roth immediately saw the discovery of this music as a huge stroke of luck. As a musician, when do you ever get to discover an entire oeuvre that is first-rate and yet has been forgotten?! The idea was obvious to tackle the complete recording of all works for violin. As this project has meanwhile been completed, Roth wanted to return here to his first encounter with the music of Weinberg, the Piano Trio op.24.

After Weinberg and his wife were able to move to Moscow in 1943 with the help of Shostakovich, he wrote the Piano Trio op.24 in 1945. In 1947 the premiere took place at the Moscow Conservatory with Weinberg, who was himself an excellent pianist, together with Dimitrij Zyganow (violin) and Sergej Schirinskij (violoncello), who were both members of the famous Beethoven Quartet. The present recording is based on a copy of the manuscript from 1945, which contains all of the original ideas about the dynamics, phrasings and peculiarities of the composition. The opening Prelude of the Trio shows great assertiveness and a determined character, but is brought to an abrupt end by the Aria, performed by a lonely and sometimes fragile violin with interjections by the piano. The second movement, the ‘Toccata’, has a captivating drive right from the start, a typical feature of Weinberg’s compositional style and one which he uses again and again with huge skill and to great effect. The series of notes pound down wildly on the listener.

This is followed by the third movement, appropriately titled ‘Poem’. First, the piano raises its voice accusingly in a longer monologue, before the violin and cello spin a melody that emerges from the silence, leading to a brilliant climax, which in turn leads back to the opening melody. The finale is equally virtuosic for all three instruments. It contains a remarkable fugue and sound sequences that are definitely reminiscent of Shostakovich, but which come across in a very different guise. Here too Weinberg uses a stylistic feature that is unique to his musicality: he quotes himself and processes the opening theme of the first movement once again. An inserted waltz in a plaintive manner is followed by a swan song after warning and threatening deep bass notes from the piano. After all the huge drama this trio contains, Weinberg sends a ray of light down to the listener in the form of the bright and long-lasting harmonics of the strings. Like so many of his works, this one too ends in pianissimo and morendo, a typical characteristic of many of Weinberg’s final bars.

Until shortly before his death in 1996, Weinberg’s works were regularly performed with great enthusiasm by Russian artists and now, they slowly but increasingly are reaching the international concert stage. His Piano Trio, like his other numerous works, shows his immense mastery of all compositional forms, genres and styles - always shaped by events in his own fateful life, such as escape, expulsion, the murdering of his family and the constant danger to his own being.

This production was supported by the Adam Mickiewicz Institute.
Financed by the Ministry of Culture, National Heritage and Sport of the Republic of Poland as part of the Multi-annual Programme NIEPODLEGŁA 2017–2022

José Gallardo (featured)More information
06-12-2021 Music Frames
"The presentation and diction of these musicians is phenomenal, self-assured and has a convincing expressiveness"