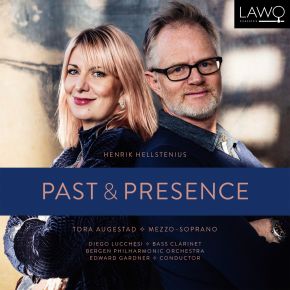 A THEATRE OF SOUND AND SILENCE

Henrik Hellstenius’s intense yet unassuming exploration of the interacting worlds of sound and time has spanned more than three decades. That hunger for discovery is perhaps the single most unifying feature across his life and work. It was already forming rapidly in his youth, from his teenage years spent listening to Keith Jarrett and Jan Garbarek to his studies of spectral music with Gérard Grisey in Paris.

In between, Hellstenius studied musicology at the University of Oslo and composition at the Norwegian Academy of Music, where he is now a professor. Even then, Hellstenius was only interested in looking forward. Presently, his music is best heard as an intense reflection on the times we’re in, each piece the culmination of a slate-cleaning hunt for new sounds and delivery techniques that best serve the text (or subtext) in question and often draw out rich assets from minimal or unassuming material.

The composer’s many concertante works, like his operas, tell real-life stories – whether personal and narrative or purely coloristic and abstracted. The mostly vocal works in this collection offer an inside track on the composer’s response to idea and text, full of ‘presence’ and in the present tense, even when elements of the subject matter hark back to the past – to musical or constitutional foundation stones. They reveal the sort of fresh and fragmented lyricism that, in so many of the composer’s works (vocal or otherwise), barely allows itself to be heard.

A constant stimulus for Hellstenius has been the work of performing musicians. ‘They have something I don’t – an intimate knowledge of their instruments and ideas about how it can be used,’ the composer once said. One such musician is the bass clarinetist Diego Lucchesi, with whom Hellstenius worked on projects organized by BIT20, the contemporary music ensemble of Norway’s second city, Bergen. The two soon started to discuss a potential new work for Lucchesi to play. A commission eventually came from Lucchesi’s principal employer, the Bergen Philharmonic Orchestra, for whose 250th season Hellstenius wrote his concerto for bass clarinet, Still Panic, in 2016.

The title refers to an infamous work by the British composer Harrison Birtwistle. Panic is a concerto for alto saxophone, drum kit, woodwinds, brass and percussion first heard at the Last Night of the BBC Proms in London in 1995, after which the corporation received numerous complaints from conservative television viewers. Birtwistle’s piece, which describes ‘the feelings of ecstasy and terror experienced by animals in the night at the sound of Pan’s music’ according to the composer, was played in Bergen in 2000 alongside the first performance of Hellstenius’s own score Theatre of Sleep.

In 2017, Hellstenius fulfilled another commission from the Bergen Philharmonic Orchestra with a concertante piece for the ensemble and the Norwegian mezzo-soprano and actor Tora Augestad. As If The Law Is Everything uses material included in the work Loven (‘The Law’), written for the Oslo Philharmonic Orchestra three years previously.

A consummate singing actor, Augestad has been a longstanding collaborator of the composer’s and sang the role of the Queen in his second opera Ophelias: Death by Water Singing (also available on LAWO). Hellstenius had Augestad’s voice in mind when writing the piece. ‘She has this special timbre in her voice, or more specific, timbres: a strange combination of the German Weill tradition and the classical lied tradition and long experience as a singer of contemporary music,’ he says.

As If The Law Is Everything sets verse by the Norwegian author and poet Øyvind Rimbereid that reflects on laws both natural and manmade. Across seven sections, Hellstenius’s work explores criminal law, the laws of nature and what Rimbereid refers to as ‘the first human law’ – to be present for each other and caring of one another. Included are first-person portraits of three women: a thief hiding from the authorities, a judge reflecting ‘on the fragile balance between right and wrong’ and a murder victim who, in the first instance, the law has failed.

Robert Schumann’s song cycle Dichterliebe is one of music history’s most moving and admired song cycles. It was written in a little over a week in 1840, in the midst of a personal crisis in which Schumann’s prospective father-in-law was attempting to block the composer’s marriage to his daughter, mostly by slandering him. Partly in rebellion against the social order that held sway in Germany, Schumann turned to the poetry of Heinrich Heine, whose works looked west to Paris in their freedom, outspokenness and scented language.

Hellstenius’s own Dichterliebe from 2015 consists of ‘composed interpretations’ of eight of Schumann’s songs – a look at Dichterliebe through twenty-first century eyes but with the apparatus of the symphony orchestra Schumann knew well (albeit extended). An excavation of the original music’s structural and emotional layers led Hellstenius to look for ways of allowing the songs to ‘ring with a new atmosphere and sound’.