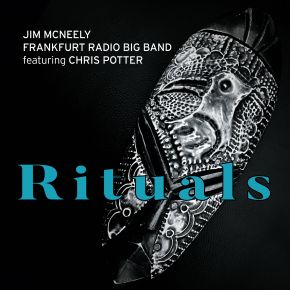 “Le Sacre du Printemps” (The Rite of Spring) by Igor Stravinsky is regarded as a key work of classical music of the 20th century. Due to its rhythmic and tonal structures, interspersed with numerous dissonances, it created turmoil in the audience at its world premiere in Paris in 1913, but was then able to quickly establish itself as a central work in the repertoire of concert halls.

With a tribute to this work, the hr Big Band, which plays here as the Frankfurt Radio Big Band, and the American tenor saxophonist Chris Potter, fills essential parts of their new CD “Rituals”.
"The work was commissioned by the Alte Oper Frankfurt, which held a Stravinsky Festival in 2013,” Olaf Stötzler recalled, producer of the hr Big Band. "At that time there was a music festival around a central work of classical music, in this case ‘Le Sacre du Printemps’.

The idea was to commission Jim McNeely to compose this work for Chris Potter. However, it is not a jazz version of *Le Sacre du Printemps’, but instead a new composition. It was inspired by the sound language of 'Le Sacre du Printemps’.” The performance was a huge success, which is why Potter and the hr Big Band decided to record the whole thing again in a studio. With plenty of verve and aplomb, the hr Big Band glides through the complex rhythmic and harmonious score that McNeely composed in the spirit of Stravinsky.
"McNeely didn't just take a theme from Stravinsky and set it differently, but instead created a new composition," Stötzler emphasized. “But you can hear that it is clearly inspired by the sound language of ‘Le Sacre du Printemps’. That's why McNeely extended the standard line-up of the big band to include a French horn, a harp and percussion. In addition, he composed an additional movement called 'Rebirth’, which does not even exist in the original."

With Chris Potter, one of the best contemporary saxophonists could be won over for the role of soloist. With a unique sonorous tone and inexhaustible inventiveness, he actually seems to play as if his life depended on it. "Chris Potter is the voice of this spring sacrifice," Olaf Stötzler explained. "He embodies this character, which is why we chose a soloist in the first place. Musical representation of this spring sacrifice is a mammoth task. He really plays all the time, and that's a challenge for which we wanted to have one of the best."

If you already have someone like Chris Potter in the studio, then his music should also play an important role. That's why the six-part "Rituals" are followed by four pieces from Potter's catalog, which McNeely rearranged for the large orchestral context. "Dawn" and "Wine Dark Sea" are from his album "The Sirens" (ECM 2013), "The Wheel" is from "Underground" (Sunnyside 2006) and "Okinawa" is included on the live album "This Will Be" (Storyville 2001). In them, the musicians of the hr Big Band, such as Steffen Weber, Tony Lakatos, Heinz-Dieter Sauerborn and Axel Schlosser, also have the opportunity to perform as soloists. They once again clearly show how well the collaboration with the American jazz star works and where the strengths of the hr Big Band are.

"Thanks to our daily interaction, we have a very good ensemble sound and we attach great importance to it," Olaf Stötzler emphasized. "The strength of the hr Big Band is that we can offer a lot of doubling in the saxophone set. There are many woodwind instruments that are not to be found in a typical big band. It is precisely these orchestral colors that Jim McNeely needs for his music. We are willing to experiment anyway, and the musicians are grateful for the chance to do it."

The album "Rituals" is the best example of the fact that the joy of experimentation can also be accompanied by fun and impressive sound clarity.