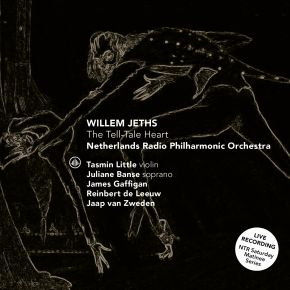 Mors Aeterna for orchestra, which was premiered in November 2015 during the NTR Saturday Matinee series, narrates a quest for stillness, a piece of pervasive calm, of gentle sounds which were intended to create the impression of having come from the hereafter: the Nirvana of silence where the soul can retreat.

In the Second Violin Concerto, Diptych Portrait (2009) The orchestra is more of a sounding board than a partner in any dialogue. So what is this all about, these convulsive tensions, overblown crescendi? It is the soloist’s split relationship with himself. This is a double portrait of one individual, torn apart internally. The violin represents an abstract character that, despite being tormented and audibly injured, strives to come to terms with itself and even appears to succeed in doing so when we hear the serene sigh of enlightenment at the close of the piece.

In The Tell-Tale Heart (2017) the building blocks of Jeths’ thematic narration are all there; death once again, once again an internal monologue. But now transformed by Jeths into an opera, intended to supplement Bartok’s one-act work Duke Bluebeard’s Castle – another horror story – a link actually referred to in the score. Here, the narrator of Poe’s tale becomes a woman, as Jeths needs the part to be sung by a soprano: a piece for musical theatre performed by a single, fairly obsessed character. Death may well be our fate, but you cannot have death on your conscience. Only when you have left your ghosts behind can your conscience find peace.

Fourth disc of music by Dutch composer Willem Jeths (*1959) on Challenge Classics. After Symphony no.1 (CC 72693), the opera Ritratto (CC 72849) and the Requiem (CC 72874), here is a new orchestral disc with three substantial works. A purely orchestral work is followed by a violin concerto and a theatre piece for soprano and orchestra. Soloists and conductors are all first rate: Tasmin Little (violin), Juliane Banse (soprano) – van Zweden, de Leeuw and Gaffigan on the podium. Although surely based on strong intellectual fundaments, the music is approachable: a sort of 21st century follow-up to the late-romantic style.