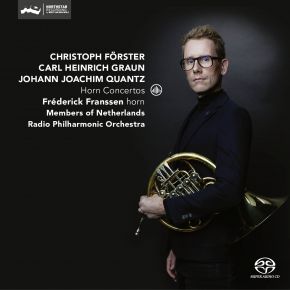 Fréderick Franssen: From among the enormous choice of horn repertoire available in the early stages of my study of the instrument, my interest was piqued by the very earliest horn music. The music from that era did and still does exert its magic on me due to the pure beauty of its clear and transparent sound world. One of my first finds on this quest of discovery through the Baroque period was a concerto by an unknown hand, which appears on this album and comes from a very special collection – the ‘Wenster’. The library at the University of Lund in Sweden contains one of the largest collections of horn music from the first half of the 18th century, under the name of ‘Wenster’. The manuscript contains 18 works, with virtually all of the composers having some sort of connection to the city of Dresden, and it may have been transcribed by a travelling horn player during a visit to that city. The six works on this recording are all taken from this collection.

Fréderick Franssen (1977) plays the French Horn in the Netherlands Radio Philharmonic Orchestra. Besides the orchestra he performs as a soloist.

A rare and precious disc of Baroque horn concertos. These concertos they all come from a Swedish collection named ‘Wenster’. The composers and the works have all a connection with the town of Dresden, an especially vibrant musical centre at the half of 18th century. Played on modern instruments by musicians who are well-informed on historical performance practice.

Yes, this is a Hybrid SACD.

Is the disk hybrid SACD, with both stereo & surround recordings?

Indeed a beautiful SACD! It's a pity the first 3 clips (horn concerto) do not contain the actual horn, though.