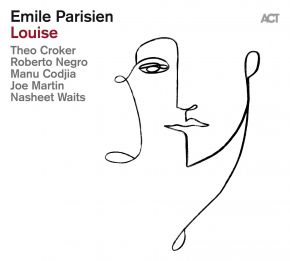 A musical journey with Emile Parisien is an adventure, something way out of the ordinary. The soprano saxophonist’s sound is instantly recognisable – as is the way with the greats – and you know that you are in the best possible company to set off for a destination shrouded in uncertainty. For the past twenty years, the one-time child prodigy of Marciac has found ways to astonish, to shake up and to enchant listeners with colourful and productive experiments. His driving force is a passion which seems physically to take hold of him as he plays. Anyone who has seen his development as a performer knows what he’s about; there is an element of the dance but also the tension of a coiled spring. And among the musicians who seek him out are not only the very best of his own generation but also the jazz masters, such is his reputation both as a leader and as an inspirational partner. As a musician he is one of a kind, with a power to be evocative and to bring convincing shape to the unpredictable. His musical language can express sudden frenzy, keeping the listener completely on tenterhooks, but there are also outbursts of tenderness and a palpable emotional honesty.

“Louise” takes its title from Louise Bourgeois and more specifically her sculpture of a spider, “Maman”. Her monumental work has motherhood as its theme, also conveyed through the metaphor of weaving, an underlying thread that runs through Emile Parisien’s creation. He has assembled a group of musicians who bridge the two sides of the Atlantic. The saxophonist has set out to combine the essence of jazz with his own purposes; so what shines through here are both his kaleidoscopic imagination and his appetite for breaking down barriers. Three American musicians are in the group, all of them friends whom he has got to know over time.

Their eagerness to engage in fruitful conversations with a trio consisting of Parisien himself and two of his closest colleagues from France is miraculous. All kinds of nuances and a confluence of influences are to be heard here. We find variations of pace from skittering syncopations to the softly majestic. Textures are meticulously calibrated, with a broad palette of instrumental colours both in the original compositions and in a burning cover of Joe Zawinul’s “Madagascar”. This collective endeavour leaves plenty of room for individual inventiveness, yet there is a happy balance between the different personalities as well. Emile Parisien, always hyperalert, knows when to step back and to leave the initiative to his partners, but will then re-enter authoritatively and be the catalyst who completely re-energise them. “Louise” is just magnificent in its twists and turns, and in the way it celebrates the sheer joy of the groove. We have taken a path towards intoxicating freedom with a team of artists in complete balance both individually and collectively. Through its subtle amalgamation of diffidence and affirmation, this pellucid music tells us the truth about life.

Intense, modern and melodic. Undoubtedly a CD for the year-end lists.