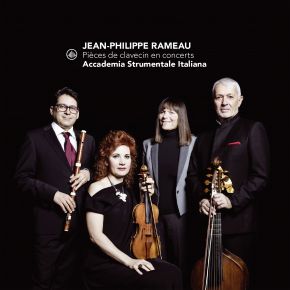 Fifteen years after his Nouvelles Suites de Pièces de Clavecin, Rameau once again turns his attention to an instrumental work, for what will be the last time, inspired by the new potential for chamber music glimpsed in the use of the concertante keyboard. The 1741 collection is the only new work he produced between 1740 and 1744, before returning to the musical theatre – to which he will dedicate the rest of his lifeThe most attractive aspect of the Pièces de Clavecin en Concerts, and the one which provides the most authentic reading of the work, is the multiplicity of possible combinations in performance between the instruments indicated in the score (harpsichord, violin/flute, viola da gamba/2nd violin ), following the detailed instructions that Rameau provides for each of them in the various Avis in the preface of the printed edition. The author’s intention was undoubtedly for the harpsichord and its virtuosic protagonism to be the backbone of the Pièces; however, the possibilities of alternative timbric arrangements are specifically contemplated by Rameau for this work. What was a widespread ad libitum performance practice, today becomes an extremely inviting challenge for modern performers in terms of tonal reinvention of the pieces. Thus, with each new reading the music may be reinvented, making in turn every new listening experience a rediscovery and a revelation.

After Bach’s Kunst der Fuge, Alberto Rasi and his Accademia Strumentale Italiana take on a new challenge, recording the contemporary French masterpiece by Jean-Philippe Rameau. he great novely of the Pièces de Clavecin en Concerts is its concertante nature: “as it is not only necessary that the three instruments blend with one another, but also that the concertante parts listen to one another” as the author himself writes in the Avis. The perfromance novelty in Rasi’s account – that conveys the full potential of the score - is given by the decision to exploit the multiplicity of possible combinations in performance between the instruments indicated in the score. The work comes out refreshed and the listening becomes an experience of revelation.

In short this is an excellent disc and one that should entertain and entice lovers of late Baroque French music.

"
16-07-2022 L'Arena
" "
14-07-2022 Visie Gids
" "
29-03-2022 Sonograma
"A marvel of this recording is that the musicians of the Accademia Strumentale Italiana, with a sensitivity and a maturity that allow them to renew the approach to this music, deploy the interpretative practice ad libitum – widespread at the time – with rigour and caution... This recording is much attractive also for the performance criteria used by the Italian ensemble."
Luister
""The recording technique has balanced the four instruments beautifully: the silvery, sparkling harpsichord keeps the leading role, but the other soloists are by no means pushed aside. In the deep Rameau waters, still truly hidden treasures appear to lie.”"