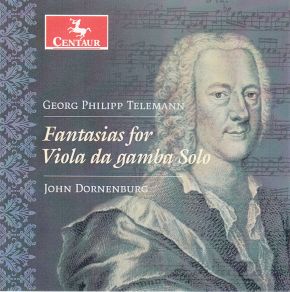 The existence of Telemann Fantasias for Viola da gamba has long been known about by musicians, but until very recently no surviving copies had been located.  Fortunately, a single complete print was identified by two musicologists in the Lower Saxony State Archive, after the private library holdings of the Schloss Ledenberg were transferrred there in 2000.  A major edition wasn't available until 2016.
Fanfare: Veteran gambist John Dornenburg’s new version was recorded in October 2020 in England—St. Mary Magdalene Church in Gloucestershire, specifically. I was pleased with both Smith’s and Boothby’s recordings when they appeared, and I am sure I would continue to be pleased if I played them on their own. Dornenburg, however, has an edge on both of them. While all three gambists seem to have a very similar understanding of the music per se—tempos are almost identical, and so on—Dornenburg’s playing is more assertive and his tone is warmer, fuller, and more characterful.... a top recommendation