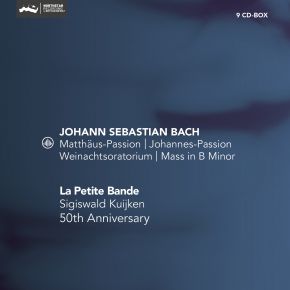 It was September 1972, just after the final notes of Lully's opera Bourgeois Gentilhomme, to a text by Molière, had been recorded by a fairly random assembly of musicians who had got together for the first time to do this – mostly young and enthusiastic advocates of authentic Baroque performance, directed by Gustav Leonhardt, harpsichord maestro and discerning driving force behind this recording. Dr. Alfred Krings, of the German Harmonia Mundi recording label, then asked the inevitable question of what name this previously non-existent ensemble should be given on the record sleeve...

With a delicate, slightly enigmatic smile on his face, Gustav Leonhardt conjured up his suggestion of "LA PETITE BANDE". Leonhardt was a man of somewhat aristocratic demeanour and I instantly felt I recognised a subtle but unmistakeable reference to the slightly "gang-like" aspect of our hitherto unblooded musical get-together, and I was happy about this covert allusion as I felt really at home in this brand new grouping. But a few seconds later (presumably because I was gazing at him in puzzled confusion), he explained to me what his suggestion was all about: La Petite Bande, he said, was the name used sometimes at the court of Louis XIV to describe a smaller and most likely better qualified group of musicians, called upon for auspicious occasions only, in other words a sort of musical elite. I swallowed my views on this apparent contradistinction and immediately said I agreed entirely with the suggestion. Nothing "gang-like" about this group; rather a prestigious, elite Bande de musiciens. Personally, I felt that we were reaching a bit too high, but most of all I was relieved and happy that this problem (of giving the infant a name) had been dealt with.

When I look back now, I'm astonished and grateful that this unusual birth of our "little band" – obviously more the result of happy circumstance than premeditated decision – has continued to define the character and ambience of our collaboration over the entire 50 years of our existence as an 'action group'.

When you're a musician, or playing in a group of musicians, you need to play every concert as if it were the very first, but at the same time perhaps the very last. This keeps the work mint-fresh and banishes any suffocating routine. The real, deep reason for playing any music at all (even if you play on your own) is your connection to the situation you're transcending, which gives you the most personal, inner satisfaction. If this feeling ever starts to evaporate, where's the fun?

Yes, this is the breath that keeps us musicians alive, and we've always chosen musicians who can share this same breath with us. The mentality – that common philosophy about the work – is absolutely the most important aspect; it very largely determines the quality that can then be communicated to our audience. In the most literal sense, a musician must always remain an amateur – a "dilettante" – as only then will the listener share in the enjoyment.

This amazing box celebrates the 50th anniversary of one of the most influential and seminal Baroque ensembles of the recording history: La Petite Bande and its conductor, Sigiswald Kuijken. The box contains the St. Matthew Passion, the St. John Passion, the Christmas Oratorio and the Mass in b minor. All these works are performed according to the individual and strictly musicologically based criteria elaborated by that great musician who is also a great scholar that goes under the name of Sigiswald Kuijken.