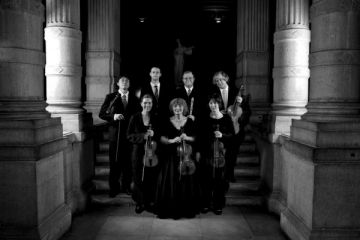 La Petite Bande (Belgium) was founded in 1972 by Sigiswald Kuijken at the request of the record company Deutsche Harmonia Mundi in order to record Lully’s Le Bourgeois Gentilhomme, under the direction of Gustav Leonhardt. The orchestra takes its name and constitution from Lully’s own orchestra at the court of Louis XIV. All its members are internationally renowned specialists in the early music field. Although originally La Petite Bande was not meant to become a permanent orchestra, the success of the recordings was such that they began to give concerts regularly.

La Petite Bande has recorded instrumental as well as vocal music, including operas and oratorios from the Baroque and Classical periods. The orchestra has performed in a multitude of international festivals and concert series, in Europe, Japan, Australia, South America and China.

Since 1997, La Petite Bande has been orchestra-in-residence in Leuven. 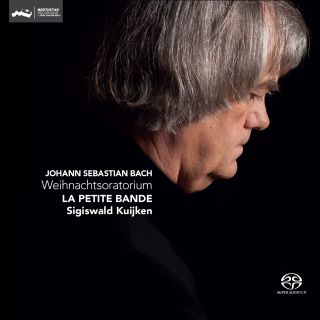 Johann Sebastian Bach
€ 18.95
Add to cart
Product is on stock 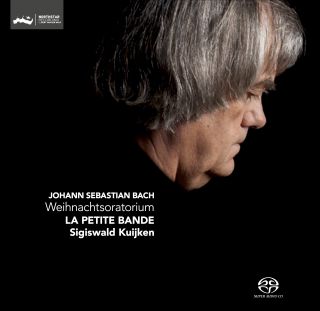 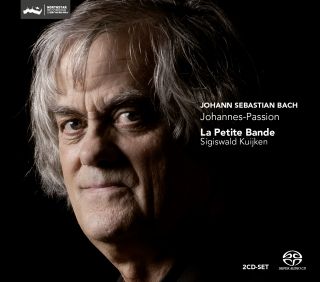 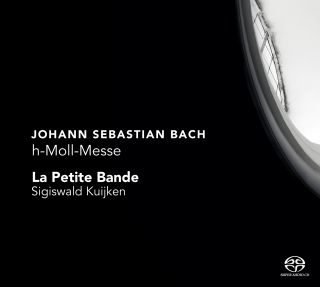 Let me know when available - € 59.95
06-12-2018 Stretto
"Very nice performances by beautiful voices with appropriate, militant jubilation, devout depth, and ensembles with a very, very original sound. Highly recommended."
31-01-2018 Music Web International
"A superb performance, and recording – which sounds perfectly fine even on my bog-standard CD player"
01-12-2017 BBC Music Magazine
"A feeling of gentle, cultivated musicianship pervades the disc's 74 minutes, which anyone already familiar with its contents will appreciate."
01-07-2017 Concerto - DE
"Already the used fortepiano is sensational!"
16-06-2017 Kerk en leven
"More than pleasantly surprised by the sober and at the same time clever interpretation of La Petite Bande."
01-05-2017 Stereo & Fono Forum
"The result can be completely convinced, as the balance is perfect and musical as well as cast from a single mold."
24-04-2017 Klassieke zaken
"Really something for lovers of old Instruments. You are spoiled with three piano concerts, but not the usual versions."
04-04-2017 Kerk en Leven
"Fresh played without compromise and yet very pure, very beautiful expression but quite bland sentiment, in a few words: fresh and crispy!"
03-04-2017 Pianist
"(...) Everything fits perfectly or complete each other, and the strings are mostly an essential energy source of the music. (...)"
01-04-2017 Concerti
"The chamber musical approach is the big plus of this SACD"
08-03-2017 Pizzicato
"

Vivid and beautifully shaped performances. The recorded sound is warm and well balanced.

"
08-02-2017 HRAudio
"The short of it: This is a ‘must have’.
Three of Mozart’s sunniest piano concerti in chamber version is not new on disk. But this one is."
05-12-2016 musica-dei-donum
"A major factor is the performance of the part of the Evangelist. All said and done, if I had to choose one of these recordings, this aspect probably would make me to go for Kuijken."
30-03-2015 BBC music Magazine
"This delicately expressive and intimate performance captures the tender essence of the Christmas story.
Performance 5 out of 5 stars
Recording 5 out of 5 stars"
01-03-2015 Gramophone
"["].. For all the many fine attributes in this new reading, this is enough of a drawback to place it quite a distance below the front-runners of Harnoncourt, Fasolis, Werner and, more recently, Stephen Layton.""
01-03-2015 International Record Review
"['']...It's a recording to cherish and one that captures the spirit of the work as completely as any i know...['']"
23-02-2015 Diapason
"5 tuning forks (diapasons)!
"The threshold of two hundred (!) recordings of the Christmas Oratorio has been crossed according to the Bachcantatas.com website, with extensive discographies. But this is the first time a leader reads this with the light of the choir of soloists, with a reduced number, of which the musicologist Joshua Rifkin demonstrated the relevance a quarter of a century ago and which was already applied and recorded on cd’s of both Passions and the Mass in B by Sigiswald Kuijken.""
01-02-2015 Early Music Review
"['']...With Kuijken leading and directing the ensemble from the wing of the instruments, there are only occasional moments when I feel the lack of an independent conductor, but the players where to make the minute adjustments for the singers that give this performance its caressing chamber-music quality without sacrificing its dance-like energy...['']"
19-01-2015 Toccata
"A moving and exhilarating interpretation which can truly be called the reference recording of Bach's Weihnachtsoratorium. Congratulations!"
30-12-2014 Der Kurier
"A sensitive, very nuanced, flowing and very transparent interpretation that is beautifully performed by the Ensemble which is destinated to it."
22-12-2014 WDR3 TonArt
"Music with a superb orchestration"
19-12-2014 Trouw
""A sympathetic, peaceful interpretation.""
06-12-2014 Süddeutsche Zeitung
"the most exciting christmas-celebration within livin memory"
25-11-2014 www.kultur-port.de
"It is a brilliant recording which sets new standards.

Kuijken's masterstroke."
01-02-2014 BBC Music Magazine
"An interview with Sigiswald Kuijken about his past recordings. To begin with the St. Matthew Passion.."
01-09-2012 Gramophone
"Kuijken reveals a far more gratifying perspective of where less is more - physically and emotionally"
01-09-2012 BBC Music Magazine
"Christoph Genz is an outstanting Evangelist. And the soloists, too, are excellent."
01-07-2012 Music Web International
"
I've listened several times to this account of the St. John Passion and I've enjoyed it every time. More importantly, I've found it a rewarding experience and I hope that other listeners who hear it will feel the same way. "
01-07-2010 BBC Music Magazine
"Performance: 4****
Recording: 4****
["].. Recording balance is ocasionally suspect: the gloriously climactic ripieno chorale in the opening movement is almost inaudible - one distant soprano above double choir and orchestra.""
24-06-2010 Reformatorisch Dagblad
"With Kuijken no major drama, but modesty, intimacy and transparency. In his interpretation we hear his awe for the text. "
23-06-2010 AVROTROS website
"Mendelssohn was impressed by Bach's masterpiece and decided for a reenactment, but then adapted to the musical fashion of his time: with a romantic symphony orchestra and a large choir. It took almost two centuries, before the Matthew Passion slowly was stripped to the small cast of Kuijken and La Petite Bande. "
23-06-2010 Artsenkrant
"One of the pioneers of Bach solo occupation is Sigiswald Kuijken. Kuijken opts radically for solo occupation. The soloists that interpret arias, also sing the choral parts what leads to one voice per vocal group in the two choirs that Bach provided in the Matthew Passion."
15-04-2010 Tertio
"Sigiswald Kuijken is familiar with the St. Matthew Passion. It is a homogeneous group of experienced soloists.The esembles sounds more transparent and more virtuosic. "
15-04-2010 De Bond
"Passion of the passions, La Petite Bande. It was inspiringly performed for a wide circle of music lovers.-"
14-04-2010 Klassieke Zaken
"The discussion about the ensemble size will always remain, but it is clear that Kuijken is very convincing with this Matthäus and his barefooted version of it. "
08-04-2010 Nederlands Dagblad
"From the first notes, it becomes clear that a strong sense of musical style is coupled with a weathered, sober interpretation of Bach's masterpiece, and that impression stays with you throughout the three SACDs"
07-04-2010 CV Koers
"Sigiwald Kuijken has been experimenting for ten years with this small ensemble. He has convinced many listeners of the historical accuracy and the high artistic level of La Petite Bande"
07-04-2010 HVT
"Recently released by Challenge Classics SuperAudio on three CDs. A beautiful, balanced, and transparent performance."
07-04-2010 Contact
"Ad in magazine of Fnac: Contact"
07-04-2010 Klassieke Zaken
"Because everyone was present and concentrated from the first to the last note, it has become a unique recording, that could be very succesful.The intensity and atmosphere can be felt in the recording."
06-04-2010 Mania Klassiek
"The persuasiveness of this approach (created by thorough research), makes the passion accessible and attractive, both for an interested layman, as the religious musician. "
31-03-2010 Alte Musik
"The advantage is the sleek sound and great text comprehension. "
31-03-2010 Klara
"With this new recording Sigiswald Kuijken and La Petite Bande show us that convincingly this approach works. Everything seems to fall beautifuly and naturally into place. The choirs and chorals are gaining expressiveness and harmonic richness."
30-03-2010 Hifi.nl
"The on three SACDs divided work sounds bright, very bright. The transparency is so present that every word and even the placement of every musician or soloist is easy to follow and to place. The minimalist setting of La Petite Bande makes the performance of Bach's work controversial. However, the performance feels comfortable and engages the listener with the lyrics. "
18-03-2010 Luister
"Bach has such tremendous depth, that as a listener your are immediately affected. That is the spiritual quality of the music. "
18-03-2010 Elsevier
"The album Matthaus Passion is not mystical. She is careful. "
17-03-2010 De Gelderlander
"How does it sound? Crystal clear and sonorous."
03-03-2010 50plussers
"For those who cannot go to a concert or who simply cannot get enough, this wonderful album of the Baroque orchestra La Petite Bande is their solution. "
22-02-2010 Opus-Klassiek
"Who is looking for a beautiful solistic Matthäus has the best deal with Kuijken for now, also looked at from an recording technique point of view. "