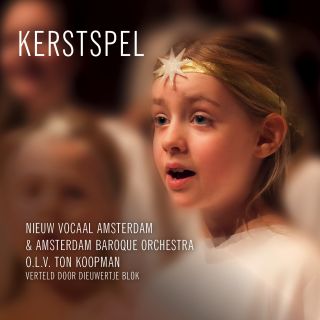 Anonymous
€ 14.95
Add to cart
Product is on stock
21-12-2017 NRC Handelsblad
"A choir can be so much more than singing.
During Kerstspel all 330 children of Nieuw Vocaal Amsterdam are on stage at the same time."

20-12-2017 Kerk & Leven
"Mozart was able to improvise tremendously and continued to play, even for hours, after concerts. Challenge Records released a new edition of such works, which Ton Koopman recorded with the Amsterdam Baroque Orchestra and Tini Mathot on the keyboard about ten years ago."
27-11-2017 Kerk & Leven
"The artistic management of NVA, with pride proudly announces that they already have 330 pupils in various roles - from little sheep to star, from angel to Bethlehem citizen, shepherds and master angels ... on stage and that they want to participate every year! Add to that a fantastic storyteller with the Christmas story from Mary's point of view, three soloists (Gabriel, Mary and Joseph) and also the Amsterdam Baroque Orchestra under the direction of Ton Koopman himself, and you get an amazing Christmas play. Without a doubt a golden recording!"
23-11-2017 Stretto
"Impressive Christmas play by Nieuw Vocaal Amsterdam and the Amsterdam Baroque Orchestra, lead by Ton Koopman"
17-11-2017 Klassieke Zaken
"What Ton Koopman, Nieuw Vocaal Amsterdam and the Amsterdam Baroque Orchestra do on their CD Kerstspel is traditional, but at the same time innovative."
10-10-2017 Klassiek Centraal
"Beautiful sound recording, musical composition perfectly matched with the Stein pianoforte from 1803, played by Tini Mathot."
04-07-2017 Pizzicato
"The carefully prepared, firm interpretations are pleasing and fit the nice, entertaining program"