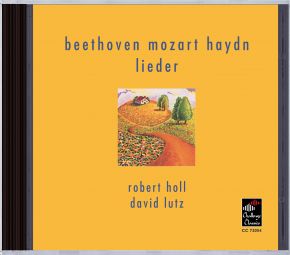 The Lied is so stamped with the concept of Romanticism that one can easily be misled into thinking that the Lieder by Haydn, Mozart and Beethoven are merely precursors or forebodings of subsequent great developments.True, in the works of Schubert a new age began in the German Lied – no composer before him had worked in this musico-literary genre in such an ingenious and all-encompassing manner, none had been able to express the purest and deepest thoughts of his art to such an extent as he – but we should not forget that the masters of Viennese Classicism also deserve an exalted and honoured place in the history of the Lied.
To approach the greatest masterpieces with a firm set of categories and criteria is always problematic.The concept “Romanticism” also permits the most diverse meanings and interpre- tations. Scarcely anyone today would dare even to think of classifying Mozart as a Romantic, as sometimes happened in the nineteenth century.Yet a Lied such as Mozart’s Abendempfindung is completely filled with the spirit so clearly revealed in Romantic works. Contemplation of the setting sun, the approaching dusk, associated with reflections on the transience of life – these are typical phenomena of Romantic poetry and sensibility.At the same time one can recognise that common stock of poetry that eludes any kind of type or category. Joachim Heinrich Campe, whose poem it is, earned his reputation above all as a pedagogue, children’s author and linguistic pioneer.The title of his poem, Abendempfindung an Laura, derived from Schiller’s “Laura” poems. It was first published in the anthology Dichtermanuskripte (Vienna: Rudolf Gräffer, 1781). In the catalogue of his works Mozart entered the work with the date 24 June 1787, omitting any men- tion of the dedicatee Laura, and with good reasons, for the song thereby acquires a dimension transcending any personal considerations. Abendempfindung is one of the most special and moving of Mozart’s compositions, permeated as it were by a fragrance of sadness, melancholy and resignation.