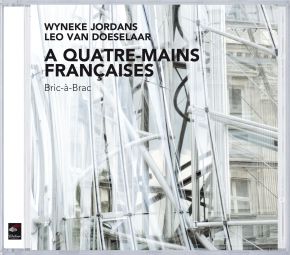 Piano duet playing was the most frequent type of domestic music making from the 19th century until well into the 20th century. All important orchestral works, and some less important works as well, appeared in arrangements commissioned by the large publishing houses. In this way one could actively enjoy the same master works in a time when the technique of recording did not yet exist. The Belle Epoque in particular saw the publication of a great deal of original piano duet music and some splendid piano duet arrangements. The same can be said for those turbulent years at the start of the 20th century. This CD is devoted exclusively to this period. The musical "Bric-à-Brac" in this programme was discovered over the course of several years in second-hand music shops in Paris. Camille Saint-Saëns composed his famous "Carnaval des animaux" in 1886 for a carnival concert in one of the salons of Paris. As early as 1922 a long list of arrangements of many of the animal portraits was issued by Durand. Only one arrangement encompassed the whole "Carnaval," and it comes as no surprise that this was the arrangement for piano duet. The Ravel pieces from "L'enfant et les sortilèges"were arranged by the French musician Lucien Garban, who spent a large part of his life making piano duet arrangements of modern orchestral works. The French composer Jean Jamain made an orchestral version of the "Pavane" and an arrangement for piano duet. Jacques Ibert himself turned the piano solo version of "Le petit âne blanc" into one for piano duet. Darius Milhaud's "Le boeuf sur le toit" was intended as a "cinèma-symphonie sur des airs sud-amèricains" for a silent movie with Charlie Chaplin that unfortunately was never made.  Wyneke Jordans and Leo van Doeselaar graduated with Jan Wijn at Amsterdam's Sweelinck Conservatory in 1981 and played their graduate recital already as a piano duo. Since 1977 Wyneke and Leo appeared as an established concert duo with orchestras and in recital throughout Europe and the USA. In 1985, the Duo was awarded the Amsterdam 'Publieksprijs' (Audience Award) whilst in the same year they were appointed visiting professors at the Sweelinck Conservatory. For many years they taught at the faculty of the Royal Conservatory in The Hague. Currently Leo van Doeselaar is professor of organ at Berlin's Hochschule der Künste. The extensive piano repertoire of the duo covers the rich tradition of music for four hands and for two pianos, as well as contemporary compositions and transcriptions from the orchestral literature.

The duo has particularly specialized in historical performance on the fortepiano. In 1993, recognition by the BBC earned the duo a series of seven concert broadcasts and recordings on historic and modern pianos.

This CD was acclaimed in the Dutch press: "... exemplary performance" (the provincial dailies); "... playing is flawless, musical and sparkling" (Christo Lelie, "Trouw"); "... magnificently festive, movingly beautiful music, also because of the fine playing and joyous music-making..." (Leo Samama, "Luister"); "With their infectious music-making they have raised these arrangements far above the level of museum pieces" (Thiemo Wind, "Telegraaf")

Could you provide me with the email address of one of your recording artists: Wyneke Jordans?

I just want to ask her a question about one of her other CDs.