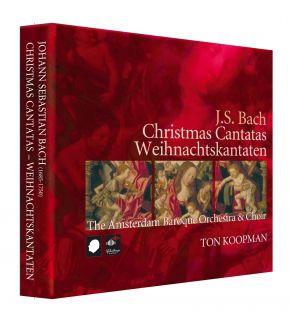 2003 was the first year Challenge Records was (and still is) working together with Ton Koopman to release the entire Bach Cantatas series, we wanted to celebrate that with a special Christmas-box. Johann Sebastian Bach’s awareness of the importance of the Christmas Season can be seen not least in his most extended work, the Christmas Oratorio. Within Bach’s rich cantata output too, the works written for the Christmas season play a prominent role. This CD box comprises the essential repertoire of the cantatas Bach composed for the Christmas season (BWV 63, 40, 64, 190 and 65).The musical programme was not restricted to cantatas: Latin liturgical works were also included. With the newly designed artwork, this box is the best Christmas gift we could offer. Let’s say: BWV 191!