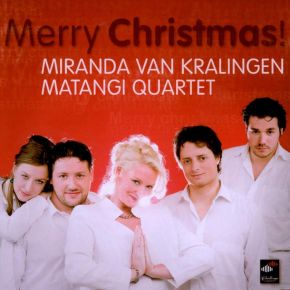 The Dutch soprano Miranda van Kralingen studied with Ank Reinders at the Sweelinck Conservatorium in Amsterdam and graduated with distinction. But it was after Elisabeth Schwartzkopf's masterclass at the Concertgebouw that her career really took off: she sang Strauss's Vier letzte Lieder during the closing concert in the category "Young Dutch Talent", which was broadcast on radio and television. This lead to a host of opera and concert engagements with De Nederlandse Opera, Opera Zuid. the Nationale Reisopera. She is known as the "singing actress" both at home and abroad, where her opera career has also taken off.

Her début as Contessa in Mozart's Le Nozze di Figaro was soon followed by roles in der Rosenkavalier, Don Giovanni, Die Lustige Witwe and Die Fledermaus. Impressed by her talent as an actress, the renowned director Harry Kupfer invited her to perform in Berlin at the Komische Oper's fiftieth anniversary. She made her impressive French debut in the Théâtre Champs-Élysées in Paris with Agathe (Der Freischütz). Her first performance of Tosca with the Welsh National Opera met with popular acclaim. She also sang with the Stuttgart Opera.

Miranda van Kralingen is much in demand as a concert singer in and outside Europe. Her wide repertoire ranges from Monteverdi to Messiaen. She regularly gives master classes including the piano/voice duo classes at the Orlando Festival jointly with Tan Crone.

She is also active on the chamber music scene and in the theatre, is much in demand at international chamber music festivals. In 2004/2005 she staged the theatrical concert Zangkoorts with pianist Gregor Bak, received from José Carreras in person the "José Carreras Diamond Tulip Award" in recognition of her national and international vocal achievements over the past years.

Miranda van Kralingen sang Schubert's Ave Maria at the Wedding of Prince Willem-Alexander and Princess Máxima on 02.02.02. She has been artistic director of Opera Zuid since June 2004. The Matangi Quartet. Matangi is a four-armed Indian Goddess of the spoken word and symbolises universal knowledge, including all forms of art, music and dance. As an artist, she forges her own way in society.  Shortly after its formation in 1999 the young Dutch Matangi Quartet's whirlwind career took off and it is now hard to imagine the Dutch music scene without them. The four members invest all their time and energy into the string quartet. Their first CD was entitled Première (CC72164), and was followed in 2003 by the provocative single CD Bats from Hell, a piece composed for them by Chiel Meijering. In 2002 the Matangi Quartet was the recipient of two prizes: the Almere Chamber Music Prize and the Kersjes van de Groenekan Prize.

The Quartet feels at home in all sorts of repertoire from early Haydn to contemporary composers. Their scope of interest has even taken them beyond the world of classical music and into, for example, a collaborative project with the Dutch cabaret artist Herman van Veen.

The Matangi Quartet has completed an intensive two year course at the Dutch String Quartet Academy (NSKA) and since 2003 has been coached by viola player Henk Guittart of the Schoenberg Quartet. The Dutch National Musical Instrument Fund has expressed their faith in the Matangi Quartet by lending them three instruments. In 2005 Matangi recorded Skandinavia (CC72137) for Challenge Classics.