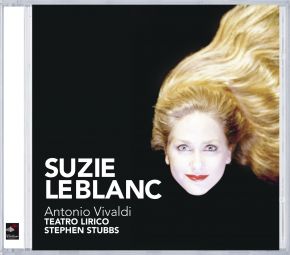 Suzie Le Blanc was praised at her Wigmore Hall début by The Listener's music critic who wrote: "I must listen to more early music, especially when this lady is singing it".

The Canadian soprano has since enjoyed an active career, performing in concerts throughout Europe, North America and Japan, in repertoire ranging from lute-song recitals and chamber music to oratorio and early opera. In addition to her work with Tragicomedia, she is a frequent guest for concerts and recordings with The Purcell Quartet, The Parley of Instruments, Redbyrd, the Freiburger Barockorchester, Fretwork and the Tafelmusik Baroque Orchestra, and she has worked with conductors such as Thomas Hengelbrock, Ton Koopman, Bernard Labadie, Andrew Parrott and Stephen Stubbs.

Her appearances in early opera productions have included Monteverdi's L'Orfeo with The Netherlands Opera, Purcell's King Arthur at the Boston Early Music Festival, Blow's Venus and Adonis with Opera-Atelier (Toronto) and Bononcini's Amore Doppio for the Musikfestspiele in Potsdam and the Early Music Festival Utrecht. Other recent engagements included the Boston Early Music Festival (Rossi's opera Orfeo), concerts with the Freiburger Barockorchester, with Ton Koopman and the Amsterdam Baroque Orchestra in the Festival of Beaune and at the BBC Proms in London and concerts and recordings for Dutch radio. For the near future engagements are foreseen with Musica Antiqua Köln, the Australian Brandenburg Orchestra and a reinvitation with the Amsterdam Baroque Orchestra.