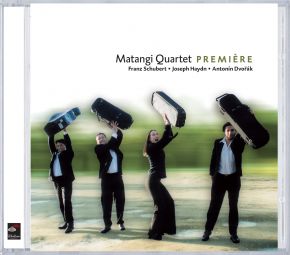 We are proud to present to you our first CD: Première. recording a first CD is an exciting time; while you are still developing as a quartet you decide to set down what you can do, what you stand for and who you are: a snapshot at the start of a long journey. Still, we are happy with our decision. We believe, in part thanks to the marvellous efforts of our producer and technician Jochem Geene, we have managed to produce a good result: this CD!

When we had decided to record this CD, we were unanimous in our wish that there had to be a piece by our great hero, the father of the string quartet, Joseph Haydn. How we all would have liked to have known him personally. The quartets of Haydn are so multifaceted that they offer a challenge to amateurs and professionals alike. Technically the music often appears simple, but those who look further into these pieces will find one surprise after the other, as well as crazy themes, harmonies and sequences. We have tried to record the Bach-like purity, almost sanctity of this quartet.

The Quartettsatz heralds a new period in Franz Schubert’s quartets. It was, after all, his first piece that was no longer aimed at amateur friends, but required a more professional approach. It is actually Schubert’s unvollendete quartet as it was to be part of a larger piece, which is only seen in the outlines of the second part, an Andante. The piece was composed in 1820 but was not published until 1870. In the intervening years it was in the hands of Johannes Brahms.

This same Brahms was not only mentor, moral help and stay, but also a good friend of Antonín Dvo ̆rák, the composer of the American quartet. The last piece on our CD, which was also called - against Dvo ̆rák’swishes-NegroQuartet,isthemostwell known and widely played of the seventeen quartets thatDvo ̆rákwrote.Thisworkwaswrittenalmost at the same time as the symphony From the New World and consequently shows some similarities with it. Dvo ̆rák had just spent some years living in America in order to give the music world there a new impetus. His visit there is echoed in the various themes of this piece. He subtly mixes negro spiritual themes with Czech folk melodies.
Karsten Kleijer