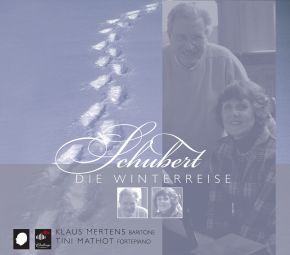 Of his output of over 600 songs that Schubert wrote, the two last and most important are the songcycles Die Schone Mullerin and die Winterreise, both written on poems by Wilhelm Muller. In early 1827 Schubert discovered in a magazine the cycle of twelve poems called "die Winterreise" and set them to music. When this was published the year after, Müller already died and probably never knew that his cycle of poems had been set to music by a certai Schubert, who was still alive and heard that Mœller had completed his cycle with another 12 poems. So he decided to set the new poems to music as well. He identified himself very much with this "cycle of frightful Lieder" as he called it. He never saw his mastewrwork published, as his own life journey finished shortly afterwards. Klaus Mertens manages to render this drama to its full extent, and a Rosenberger fortepiano is under the hands of Tini Mathot the most beautiful vehicle to bring this melancholy to sound.

The new album of Klaus Mertens and Tini Mathot is finally released!Bas-bariton Klaus Mertens and Tini Mathot on fortepiano share with us famous songs of Franz Schubert. Songs like Erlkönig, An die Musik, Prometheus, Die Forelle, Du bist die Ruh and many more have been selected by the duo and they give us their illuminating vision and version of songs we all know so well ...