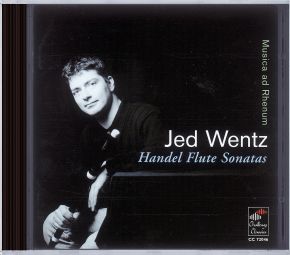 The ninth item in Handel's Op. 1 collection of chamber music is a B minor flute sonata, but Handel originally wrote it in D minor for either recorder or violin. It is by far Handel's most extensive recorder sonata, falling into seven movements that spread over nearly a quarter hour. First comes a Largo that carefully picks its way through a melody that nearly disintegrates in the final bars. The ensuing Vivace proceeds with a quick pace and determined air; the opening phrase and a few other elements of this movement appear in substantially different form in Handel's Water Music. The Presto features fast, bright passagework not only for recorder but also for the continuo instruments. The Adagio provides a stark contrast, with a melodic line that could double as a lament from an Italian opera of the period. Things perk up a bit with the Alla breve, the continuo chasing the recorder about a bar behind. This sonata's heart seems to be the Andante, the most extended movement here and one that sends the recorder's long, undulating melodic line over a firmly striding bass. The concluding movement is marked A tempo di menuet; although the mood is not exactly happy, this music skips more lightly than Handel's other minuets, the melody gliding across the bar lines rather than snagging at the end of each 3/4 measure.

Sonata in E Minor HWV 379
Uniquely among Handel's flute sonatas, this one falls into five rather than four movements and is cobbled together from three other solo sonatas. The first movement is a Larghetto with an easy, gentle swing, taken from the Violin Sonata in D minor. The final measures ease into an Adagio that sets up the second movement, a chirping Andante transposed from the Recorder Sonata in G minor, Op. 1/2. The central Largo borrows its rising arpeggio theme from the first movement of Handel's early Flute Sonata in D, HWV 378, a piece little known in the composer's lifetime. This is not a straight reuse of the earlier movement, though; Handel develops the melody differently and more imaginatively. At last the sonata's first true Allegro arrives, plucked again from the Violin Sonata in D minor but significantly revised to meet the needs of the flute. Handel failed, however, to revise it enough to eradicate a sewing-machine monotony from some of the passagework, although an alert flutist can enliven things with a few well-placed ornaments. The concluding Presto lets the flute sing over a jogging bass line; this, like the Andante, originated in the Recorder Sonata in G minor.

Sonata in A Minor HWV 374
As with most of Handel's solo sonatas, this work adheres to the sonata da chiesa or church sonata format, four abstract movements alternating slow and fast tempos, with nary a dance pattern to be heard. It has been speculated that Handel wrote this sonata by 1704, when he was still in Halle (hence its designation as a Halle sonata), but no evidence supports this theory. More likely, it's an only slightly later composition, dating from Handel's stays in Hamburg or Italy. The opening Adagio is a wistful piece whose dotted rhythms and other patterns suggest a morose, stretched-out gigue. The second movement, Allegro, is considerably brighter, though remaining in the minor mode, and builds tension at several points by repeating a brief phrase at ever-higher pitches or simply giving the flute a precarious little climb up the scale. The second Adagio, the sonata's most extended movement, is a meditation tinged with melancholy that, unlike the first movement, could function quite well without the continuo line. The concluding Allegro looks ahead to Handel's habit of writing very short, declamatory phrases separated by brief pauses, but once Handel establishes this pattern he maintains it only in the continuo, setting the flute free to follow its own ornate melodic line.

Sonata in D Major HWV 378
This sonata was discovered late and first published in 1979. The manuscript carries an attribution to one Weisse, presumably Johann Sigismund Weiss, but scholars believe it to be thoroughly Handelian. Partly this is because several of this sonata's themes appear in other Handel works. As do most of Handel's other flute sonatas, this follows the slow-fast-slow-fast church sonata format. The initial Adagio proceeds from a rising, arpeggiated theme also found in Handel's Flute Sonata, HWV 379, and at the beginning of his Violin Sonata in D major. Next comes an Allegro, with a quickly bouncing tune that also pops up in Handel's Recorder Sonata in F, his overture to Il Trionfo del tempo, and the Trio Sonata, HWV 391. The second Adagio seems specific to this sonata; it is pensive, and so short that it comes off as a mere transition to the final Allegro. The latter piece features a quick but rather monotonous theme that evokes a child running up and down three shallow stairs; this is another melody recycled into the Trio Sonata, HWV 391.

Sonata in G Major HWV 363b
Although republished in unauthorized editions by John Walsh in 1731, this sonata actually dates to the period 1712-1716, and figures in Handel's first opus, printed in Amsterdam around 1722. Oboists often stake a claim to it, especially when the work is transposed to F major; they maintain that the trumpet-like call in the Allegro is particularly oboe-like, although they concede that the Minuet is rather awkward for the oboe in this key.
The sonata begins with an Adagio that is derived from an aria in Handel's opera Rinaldo. Over a stately harpsichord accompaniment, the flute delivers a long-lined melody punctuated by brief sighing phrases. This leads with an unresolved cadence to the Allegro, which launches itself with the aforementioned stuttering trumpet call. The motif reappears frequently, and provides the basis of much of the harpsichord accompaniment, while the flute spins out highly florid melodic lines.
A second Adagio begins with a falling, stepwise figure in the continuo, whereupon the flute develops a broader, pensive melody that allows for generous ornamentation. The concluding Minuet (Handel uses the Italian spelling, Menuetto) is a lively, truly dancing piece that wouldn't be out of place in Water Music. Its duration is less a matter of tempo than how many repeats the performers choose to observe.

Sonata in E Minor HWV 375
The second of three flute sonatas supposedly dating from Handel's very early years in Halle but more likely composed slightly later in the composer's career, this work breaks from Handel's usual sonata da chiesa pattern, but with only a minor departure. There is still the slow-fast-slow-fast sequence of movements, but instead of ending with the usual abstract piece, Handel writes a minuet, the sort of dance movement found in a sonata da camera. The opening Adagio finds the flute striving slowly up the scale over a more quickly descending figure in the bass, then leveling off into a series of gently rolling phrases. This and the ensuing Allegro are transcriptions of the opening movements of Handel's Oboe Sonata in C minor. The Allegro launches an urgent theme that would be a good fugal subject, but this being a solo sonata, Handel resists real counterpoint, relegating the continuo instruments to a strictly accompanimental role. The third movement, Grave, is a florid, pastoral little piece that scholars suspect to be the work of some other composer. The courtly concluding Minuet, though, is clearly Handelian, a transcription of an early G minor harpsichord piece.

I wonder if the cd Handel Flute Sonatas played by Jed Wentz is still available.