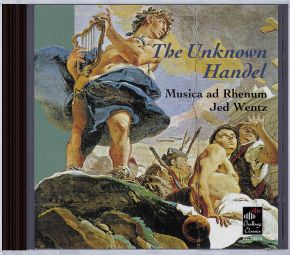 The manuscript of this sonata is held in the British Library. Scored for oboe and violin or two violins, it bears the inscription "Compos'd at the Age of 14." If such is the case, it would make one of the earliest of Handel's known works. The style, which is very much that of the Corellian trio sonata, certainly points to an early work. It is cast in four brief movements. The first is a gracious, flowing Andante whose thematic material bears a strong resemblance to the trio "The Flocks Shall Come" from Acis and Galatea. The succeeding Allegro is, typically for such a work, a fugue. That is followed by an expressive Largo and the work concludes with a lively Allegro. It was published by London publisher John Walsh around 1730 as the second of Six Sonatas, Op. 2.

A handful of George Frideric Handel's instrumental works have at one time or another been known as "Oboe Concertos," including -- quite erroneously -- the entire volume of Opus 3 Concerti grossi, but in fact Handel composed just three works that deserve the title. As it happened, the first of these three true oboe concertos to be composed, the charming little Oboe Concerto in G minor, HWV 287 that Handel wrote sometime around 1703 while still a young man living in Hamburg, was also the last to be published (it didn't see the light of day until 1863, over a century and a half after Handel wrote it), and as a result it is somewhat unfairly known as "No. 3."
The solo concerto genre was an almost brand-new thing in music when Handel wrote the G minor Oboe Concerto. The earliest known solo concertos, a pair of works in Giuseppe Torelli's Opus 6, were published in 1698, but there is no real need to assume that the Bolognese composer's work was particularly well-known as far north as Hamburg or that Handel was familiar with these early examples of the newborn musical species. Certainly Handel's G minor Oboe Concerto bears little formal resemblence to the early solo concertos of Torelli or Albinoni (who published four solo concertos in 1700), and in fact it seems a little old fashioned in comparison with those cutting-edge concertos. Torelli chose not to draw on the then-standard four-movement concerto grosso/sonata da chiesa form when putting together their solo works, but rather to adopt the more "modern" three-movement blueprint that we today recognize as the solo concerto norm. Handel's choice to write the HWV 287 Oboe Concerto in four movements, slow-fast-slow-fast, may well demonstrate how difficult it was for a North German musician like Handel to keep in touch with the latest Italian developments (Handel in fact moved to Italy just a few years later). On the other hand, Handel also used four-movement patterns in most of the much-later organ concertos, so it may simply be that he never thought of the one as "old" and the other as "new."
Today, however, such stylistic nitpicking seems rather unimportant. What is vital is that the G minor Oboe Concerto delivers some of the more thoroughly engaging solo music to appear anywhere in Europe during the first years of the new century; Handel's genius for rich, sonorous beauty and lean musical structures is in full bloom even at the age of eighteen or nineteen, if perhaps his ability as a melodist is not yet really developed.
The Concerto is scored for the usual Baroque orchestra of strings and basso continuo. The broad oboe tune of the first movement (an idea right in the sonata da chiesa vein), Grave, is introduced by a ritornello-like, dotted-rhythm filled passage for just orchestra that reappears twice as the movement unfolds--once to mark the move to B flat major at the movement's center, and then again to wrap things up at the very end. In the brief Allegro that follows the oboist starts things up itself, offering a firmly articulated subject that soon tumbles forth in somewhat more virtuosic fashion. The sarabande in B flat major that serves as the Concerto's third movement is warm and gentle, the final Allegro bold and extrovert, with ample opportunities for the oboist to shine.