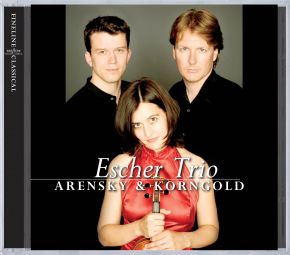 Jeroen Bal - Piano | Sonja van Beek - Violin | Johan van Iersel - Cello
Anton Stepanovich Arensky (born 1861 in Novgorod, died 1906 in Terijoki, Finland) was a Russian composer, conductor and pianist. Although many of his works have a Russian feel, he was not as nationalistic as Rimsky-Korsakov. His greatest influence was Tchaikovsky Erich Wolfgang Korngold (born 1897 in the Czech town of Brno, died 1957 in Hollywood) was a child prodigy, causing a sensation in Vienna at the beginning of the 20th century. Korngold started work on his Piano Trio op. 1 in 1909 at the age of 12, finishing it a month before his 13th birthday in April. He fled the Nazi regime for America and was welcomed with open arms by the Hollywood film industry. He wrote the scores for some 19 movies, including two Oscar-winners Impressive homogeneity, an energized style, great individuality and daring programming are qualities that have characterized the Escher Trio since its inception a decade ago. The Escher Trio has won international acclaim from successful tours of Germany, the Czech Republic, Norway and the United States.