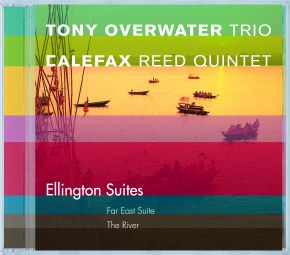 Ellington Suites Tony Overwater Trio:
Tony Overwater: double bass (acoustic)
Maarten Ornstein: tenor saxophone
Wim Kegel: drums Calefax Reed Quintet:
Oliver Boekhoorn: oboe, English horn
Ivar Berix: clarinet
Raaf Hekkema: saxophone
Jelte Althuis: bass clarinet
Alban Wesly: bassoon In 2005 the renowned jazz trio of bass player Tony Overwater and the highly acclaimed classical reed quintet Calefax, have joined forces to play and record two suites by Duke Ellington: the famous ‘Far East Suite’ and the lesser known ‘River’. This project is not only remarkable because of the interesting cooperation between classical and jazz and the choice of repertoire, but also for the fine arrangements that were for made for this particular line up, without piano! The result has been recorded in February 2005 at the prestigious new Bimhuis in Amsterdam. The CD will be released in April 2005 and an extended tour for 2005-2006 is planned Short biographies
Tony Overwater Trio consists of three top jazz musicians and is centered around one of Holland’s finest bass players, Tony Overwater. This gifted musician, who a/o played with Sunny Murray, David Murray, Paulo Fresu and Pat Metheny and who is a member of the renowned Yuri Honing Trio, is also a highly acclaimed composer contributing also to documentaries and ballets. His musical interest ranges from jazz to improvised and world music. In 2000 the Tony Overwater Trio & flugelhorn player Ack van Rooyen and cellist Ernst Reijseger, created quite a stir when they released their Edison (Dutch Grammy) awarded CD ‘OP’, a tribute to bassist Oscar Pettiford. In 2003 Overwater received the VPRO/Boy Edgar Prize, thé Dutch jazz award and in the same year he was nominated for the Bird Award.
- A virtuoso on the bass with a disinclination towards showing off (from jury’s report VPRO/Boy Edgar Award)
- ‘OP’ sets a new standard both artistically as well as in sound quality! (Algemeen Dagblad)
- Most beautiful imaginable tribute to Oscar Pettiford. (NRC)
- Breathtaking interpretations! (Parool)
Calefax Reed Quintet, founded 18 years ago, can be described as a classical ensemble with a ‘pop mentality’ and is known for its virtuoso performances, innovative programming and engaging concerts. The group performs standing up, often from memory, and always introduces itself and the program to the audience. And most importantly, the five musicians arrange, recompose and interpret music from eight centuries to suit their unique line-up: early music, renaissance, baroque, impressionism, jazz, or world premières, in the hands of Calefax it all sounds fresh and new. Calefax is recognized internationally for the quality of its ensemble playing and has toured throughout Europe both in new music forums and in renowned early music festivals. Their ever-growing discography (MDG) consistently gets enthusiastic reactions from the international music press.
- Stunning musicianship (Hampstead & Highgate Express)
- Extraordinary ensemble playing (BBC Music Magazine)
- Calefax masters the art of virtuoso arranging (Volkskrant)
- Listening pleasure from the first to the last second, musical perfection in every phrase (FonoForum) www.tonyoverwater.com www.jazzinmotion.com