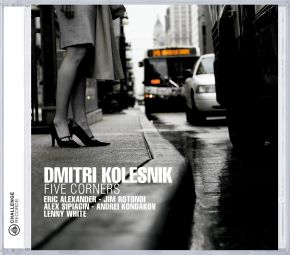 FIVE CORNERS is a result of a project that started six years ago when New York bassist Dmitri Kolesnik invited tenor saxophonist Eric Alexander, trumpeter Alex Sipiagin, pianist Andrei Kondakov and drummer Lenny White to record his music. The musicians clicked instantly, and were so comfortable playing Kolesnik's compositions that all the tracks used on the CD were first takes, alive with freshness and feeling. The recording, Blues for Dad, was released on a leading Russian label, Boheme Music, in 2001 and received good responses in Russia and the US.
Since the release of that album, the group has been performing regularly in New York. In 2005 they took part in the biggest Jazz festival in Russia: the Peter-and-Paul International Jazz Festival in Saint Petersburg (formerly Leningrad).
The outstanding personnel on FIVE CORNERS, the group's second album, is the same as on Blues for Dad but with one addition: the trumpeter Jim Rotondi, who is Eric Alexander's steady partner in different lineups. Along with Sipiagin, they are among most sought-after players in New York. At the heart of the group, Lenny White brings his unique energy and style to the music. Kolesnik's friend and collaborator Andrei Kondakov is a famous Russian musician who often appears on the New York jazz scene.