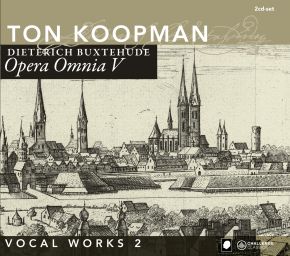 Buxtehude the organist expanded his activities as a vocal composer in an unprecedented way.

He left a particular mark as a composer of large-scale oratorios (Abendmusiken). His oratorios have not survived, but the many other vocal compositions that have come down to us represent a substantial body of works. These include in particular larger and shorter chorale settings of various kinds, sacred concertos (i.e., motets with differentiated instrumental accompaniment), arias, and multi-movement structures consisting of concertos, arias, and chorales that were later referred to as cantatas. This album presents a mixed selection of primarily shorter works in the various genres mentioned above plus some other special pieces.