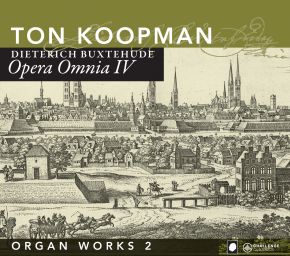 Dieterich Buxtehude's organ works are his most significant contribution to the history of music. They consist of a comprehensive corpus of just 90 compositions, of which more than half are chorale settings. However, these are mostly shorter than the preludes, toccatas and other freely conceived pieces, so these last represent a more substantial share of his entire output.

A large part of it is intended for a tuning with pure thirds and impure fifths, meantone tuning. The majority of these works must have been composed before 1683, since in that year the organs in the Marienkirche, where Buxtehude worked, were converted from the old mean-tone tuning to the more modern Werckmeister tuning. So for these earlier works the choice of a historically interesting organ in meantone tuning, such as the organ by Lüdingworth, seems plausible.

Buxtehude is my favorite composer, followed by Purcell and then Bach.