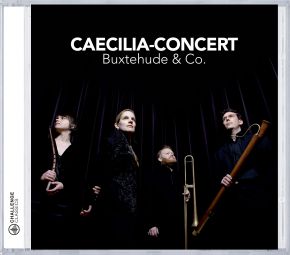 This CD gives a glimpse into the rich musical world of Dieterich Buxtehude and his contemporaries. These composers were active as Kapellmeisters and wrote music specifically to be performed during the concerts known as Abendmusiken or for various Collegia Musica. They were also associated with the Hamburg or North German School of the seventeenth century.

Originally established to entertain businessmen who assembled in the Marienkirche in Lübeck to await the opening of the stock exchange at noon on Thursdays, and most readily associated with the name of Buxtehude, the concerts known as Abendmusiken most probably began as organ recitals during the tenure of Buxtehude's predecessor Franz Tunder (1614-1667). Buxtehude's legacy was the addition of an orchestra and choir and a rescheduling of the concerts from during the week, to five concerts on the Sundays between Martinmas (November twelfth) and Christmas, from 4:00 pm until 6:00 pm.

The Collegium Musicum was a musical association or society that was devoted to the playing and enjoyment of instrumental and vocal music.

Such organizations were largely comprised of members from the upper echelons of society for example, doctors, lawyers, well-to-do merchants or members of local government who would meet at some central place or in their homes. Music was made either by the members themselves or by the local Kantor or the town musicians.