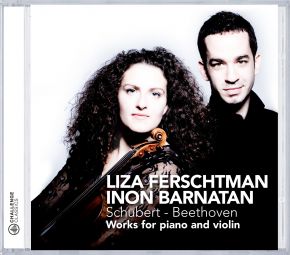 Works for piano and violin

This recording presents two great masterpieces and a song. At first sight they have not so much in common, one is a sonata, one a fantasy, one a song. One is by a composer known in general for his boisterous music, the other two by a composer more known for his melancholy. But the content of these two masterpieces (the fantasy takes its main theme from the song) show how many parallels there were between this surprisingly poetic, lyrical style of Beethoven to that of Schubert.

Though there is a big difference between the two composers, there is a certain quality, depth and emotion coming through serenity and lyricism, that these pieces share. Both are mature works: Beethovens the 10th and last of his sonatas, Schuberts Fantasy written in the last year of his life.

Mozart and Haydn had written sonatas for piano and violin before Beethoven, in which the piano is the dominating instrument, the violin playing a subordinate role. With his violin and cello sonatas, Beethoven has changed the nature of the relationship between the instruments, and elevated them to a new art form in which the bowed instruments are in virtuoso dialogue with the piano.