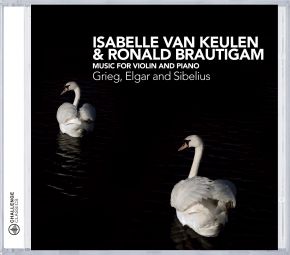 The year 2007 marks Grieg's death a century ago, the birth of Elgar 150 years ago and Sibelius' death fifty years ago. This is generally a good reason for bestowing extra attention. In this case it is also a particularly good moment to consider the legacy of these composers and draw special attention to their lesser known works. Edvard Grieg is best known as the composer of Peer Gynt, the piano concerto and miniatures on Norwegian national music. Edward Elgar is above all the composer of the Enigma Variations, the Pomp and Circumstance Marches and Salut d'Amour. And Jean Sibelius put Finnish nationalism on the map with mythical symphonic poems and seven granite symphonies. The fact that they also composed magnificent chamber music works is so far less deeply etched into the collective mind; an omission that cries out for rectification.

In 1900, at the age of 65, Grieg wrote to one of his friends that he considered his three violin sonatas to be among his best works. 'The first (1865) is naïve, rich in ideas’. Edward Elgar wrote his Violin Sonata op. 82 following a period of doubt and illness and with a new awareness of the path he wished follow. The Violin Sonata has in fact remained an underrated masterwork, which perfectly reflects Elgar's reborn state. The short Sospiri (1913, later arranged for violin and piano) was composed in response to the death of a family friend. The six Humoresques by Jean Sibelius were created at the height of the First World War and of the Finnish struggle for independence from Russia, which Sibelius championed in his music.

Edvard Grieg (composer)More information
28-11-2013 Kwadratuur
"With this very intense recording Keulen en Brautigam choose for drama without reverting to pathos."
02-04-2013 The Strad
".. the composer's five melodies came across as a carefully crafted sequence of miniatures, sophisticated both for van Keulen's alluring tone and the imaginative dreamscapes she created."