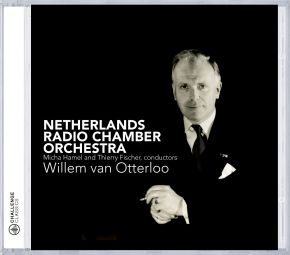 Willem van Otterloo gained his reputation chiefly as a conductor: he was chief conductor of the ‘Utrecht Stedelijk Orkest’ (1934-49) and the ‘Residentie Orkest’ (The Hague Philharmonic Orchestra) (1949-72), while he was also connected with the orchestras of Düsseldorf, Tokyo, Melbourne and Sydney.

His great significance as a conductor, which lasts to this day, is apparent from the 13 CD box, Willem van Otterloo/Residentie Orkest: the Original Recordings 1950-1960, issued by Challenge Classics in 2005 (CC 72142). As a composer he left only about a dozen compositions. Van Otterloo’s last complete composition (Serenade) dates from 1944, when the composer was 36 years old.

From 1943 dates Van Otterloo’s most successful composition, the Symphonietta (for triple woodwind and four horns), a piece that continues to be played to this day. In its fast movements it is a virtuoso and entertaining work, while in its slow passages we again hear sonorous ‘French’ chords. The double bassoon lends extra body to the ensemble and the cor anglais adds a melancholy colouring. In short, it is a finely constructed piece in which form and content go hand in hand and to which, exceptionally, the composer made no changes.

The (undated) Suite for String Orchestra is a simple piece, easy to play by amateurs, and to some extent it is influenced by Bartók (for example at the opening of the second movement), a radical point of difference from the rest of Van Otterloo’s output, which is restricted in extent. Lasting only nine minutes, this Suite gives rather an incomplete impression and seems to cry out for a short, fast final movement. An examination of the original manuscript indicates that that there is a fifth movement, marked ‘Finale, allegro molto’. Unfortunately, after the first bar, not a single note of this movement can be found.

From the black year of 1944 is the Serenade. In the first, tidily written manuscript the piece is still called a divertimento, is in four movements and is scored for brass (four horns, four trumpets, three trombones and tuba), harp, celesta and percussion. In the second, ‘definitive’ version the title ‘Divertimento’ is replaced by ‘Serenade’ and a piano part is added.

In 1958, to fulfil a commission from the Amsterdam municipality, he presented an Intrada for brass and percussion. He re-used the final movement (‘Hymne’) of the Serenade, discarding the harp part and reducing the percussion. A fourth trombone and a double bassoon were added, chords and voice leading were changed, whole phrases sometimes substituted, but despite all the changes it is still the same piece.

In 1952, when he had already been conductor of the The Hague Philharmonic for a few years - he made a second orchestration of Schubert’s Fantaisie, op. 103, which he had already orchestrated in 1940. The two versions are completely different: in the second, the brass is used more cautiously, the tuba part from the first version is left out, and above all the orchestration is more transparent, aiming towards a classical sound without the romantic, full-sounding sonority of the first. It is a functional, well-crafted instrumentation without much of a personal imprint, but subservient to the style of Schubert’s music, and thus at the opposite pole from Webern’s orchestration of Bach for example, which says more about Webern that it does about Bach.