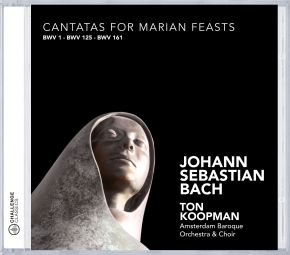 The Lutheran Reformation abandoned most of the many feasts which the medieval church dedicated to saints, but it kept St. Johns Day, St. Michael’s Day, and the three Marian Feasts: Annunciation (March 25), Visitation (July 2), and Purification (February 2).

The general importance of these feast days was underscored by the music written for them. The cantatas Bach wrote for the three Marian Feasts not only show magnificent orchestration but also a particular degree of elaboration. Hence, the overall design of these cantatas is noticeably different from that of those written for the ordinary Sundays of the Epiphany and Trinity seasons. As the Feast of Annunciation fell into the time of Lent, a five-week period without polyphonic music that was strictly observed in many areas of Lutheran Germany, the cantatas written for this occasion played as special role. For on March 25 they interrupted the musically silent period that ended with the performance of the Passion at the Good Friday vespers and the subsequent cantata for Easter Sunday, respectively.

The cantata “Wie schön leuchtet der Morgenstern“ BWV 1 for the Feast of Annunciation dates from 1725 and is based on the hymn by Philipp Nicolai (1599) that makes use of an older melody.

The chorale cantata „Mit Fried und Freud ich fahr dahin“ BWV 125 was composed about two months earlier and performed at the Feast of Purification in 1725. Its text is based on the hymn by Martin Luther (1524).

The cantata “Komm, du süße Todesstunde” BWV 161 was originally written for the 16th Sunday after Trinity and probably received its first performance in the Weimar castle church on September 27, 1716. Bach revived the cantata in Leipzig and, apparently after 1735 altered its liturgical function as well by performing it on the Feast of Purification.

Dear Sirs,
could you tell me please which statue is represented (and where is to see) on the cover of 'Cantatas for Marian Feasts' with Ton Koopman and Amsterdam BO&C? Many thanks and best whishes, Loredana Botta