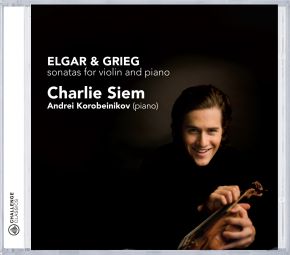 Although Grieg and Elgar did not physically cross paths (they neither met nor corresponded), there are enough biographical and musical parallels to beg the question as to why the (albeit indirect) relationship between them has been largely overlooked. And it is these points of contact that the program of this CD refuses to let the listener overlook. First, one has only to consider the similarity in their status not merely as ‘nationalistic composers’ but as national heroes. In addition to their status as authors of national music to rival the dominant German musical mainstream of Western music, there are various biographical parallels: they shared mutual friends of whom the English composer Frederick Delius is the most notable; Elgar received an honorary doctorate at Oxford University in 1905, Grieg received the same award a year later; during the first orchestral broadcast of Elgar’s music in 1923, the accompanying piece in the programme was Grieg’s Peer Gynt Suite.

These seemingly frivolous details are less incidental than one might at first assume in as much as they demonstrate the way in which the composers collided in a similar contextual framework.

Quite apart from these historical parallels there are many mutual points of contact in the works themselves – particularly in the case of the two sonatas performed on this CD – so much that one wonders why they have not been paired before.

The completion of both sonatas coincide with a distancing of their respective authors (evidenced in their writings), from the musical nationalism they were most famous for.