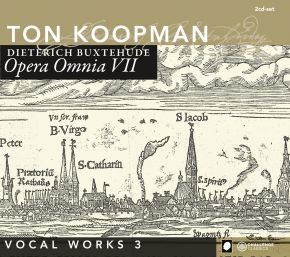 Buxtehude the organist expanded his activities as a vocal composer in an unprecedented way.

He left a particular mark as a composer of large-scale oratorios («Abendmusiken»). His oratorios have not survived, but the many other vocal compositions that have come down to us represent a substantial body of works. These include in particular larger and shorter chorale settings of various kinds, sacred concertos (i.e., motets with differentiated instrumental accompaniment), arias, and multi-movement structures consisting of concertos, arias, and chorales that were later referred to as cantatas. This album (as did vol.V) presents a mixed selection of works in the above mentioned genres: arias, concertos, and – as a composite of the two – cantatas.
Dieterich Buxtehude (Dietrich, Diderich) was a German-Danish organist and a highly regarded composer of the baroque period. His organ works comprise a central part of the standard organ repertoire and are frequently performed at recitals and church services. He wrote in a wide variety of vocal and instrumental idioms, and his style strongly influenced many composers, including Johann Sebastian Bach. Organist at the Marienkirche in Lübeck for most of his life, Buxtehude is considered today to be the leading German composer in the time between Schütz and Bach.