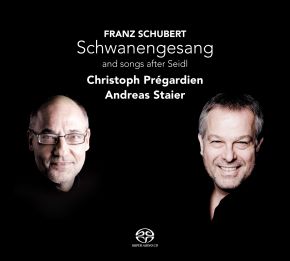 In January 1829, a good two months after Schubert’s death, the Viennese music publisher Tobias Haslinger, with whom Schubert had worked very closely in the final years of his life, placed an advertisement in the Viennese press, in which he announced Franz Schubert’s Schwanen-Gesang, 14 Lieder, “the final fruits of his noble power [...], written in August 1828, shortly before his decease.” Haslinger had obtained the rights to the songs in December 1828 from Schubert’s brother Ferdinand, who had been handling the composer’s estate, and had given them the collective title of Schwanengesang. In reality there were two groups of songs: seven songs on texts by Ludwig Rellstab and six on texts by Heinrich Heine. These two groups are contained in a common manuscript of August 1828 and are today collected together as Schwanengesang (D 957), along with a single Lied, Die Taubenpost, on a poem by his friend Gabriel Seidl (D 965 A). The Lieder do not form a single cycle, for each group appears complete in itself. In the Heine group are collected together all the songs Schubert composed on poems by Heine; the same almost applies for the Rellstab group of Lieder: apart from the Lieder in Schwanengesang the only Rellstab poems on which Schubert wrote songs were the large-scale song for voice, horn and piano Auf dem Strom (D 943), the strophic Lied Herbst (D 945), which survives as an album leaf for Heinrich Panofka, and the incomplete Lied Lebensmut.

Some anecdotes have sprouted up around the Rellstab-Lieder. During a trip to Vienna in 1825 Ludwig Rellstab had allowed some of his poems to be copied, as is recorded in Beethoven’s companion book, and he had begged him “to select them for musical setting.” This did not happen, however Rellstab records in his memoirs that “the sheets were later restored to him from Beethoven’s estate.” Some of these “were annotated with little crosses drawn in pencil in Beethoven’s own hand” – and, according to Rellstab, it was these ones that had aroused Schubert’s interest. If it is correct that Schubert in fact set the very poems that Beethoven had at first selected for himself, this would be one more sign that Schubert saw himself as a successor to Beethoven, even as a completer of his work in Lieder composition.
The seven Lieder are united by a broad, epic tone, which can also be found in Taubenpost. But they cannot be considered a cycle as they are lacking both a unifying plot and a common musical structure: the Lieder are clearly distinguishable from one another in their structure: simple varied-strophe Lieder (such as Frühlingssehnsucht; also Ständchen, with its climactic, extended final strophe) stand alongside lyrical scenes (Liebesbotschaft, Aufenthalt) or a Lied with alternating strophes (Abschied, in which two interrelated strophic forms alternate) or an aria-like, through-composed Lied (Kriegers Ahnung: the dark forebodings of the “Krieger” (warrior) are manifested first in a kind of Totentanz, then brighten to become cheerful, darkly melancholy, and finally almost ecstatic visions, before the final return of the Totentanz). The most unusual Lied is In der Ferne, characterised by the rare text metre (a short dactylic line that leaves the singer scarcely time to breathe), and by surprising harmonic excursions (prompted by the text “Mutterhaus Hassenden” – hating the maternal home). The Lied is in two parts: the two opening strophes in B minor are followed by a broadly conceived final strophe in B major (repeated), prompted by the image of roaring winds and rippling waves, leading however to a cri de coeur: “grüßt von dem Fliehenden, Welt hinaus Ziehenden” (Greetings from the fugitive, roving the world!)

Schubert came across Heine’s poems – in particular the cycle Heimkehr in the Buch der Lieder, published in 1827 – in January 1828, in a volume in the library that his friend Franz von Schober had furnished for him. In the autumn of 1828 Schubert had bequeathed the volume to the singer Karl von Schönstein, who several years later stated that all the poems in the volume “that had appeared in the Schwanengesang” were marked by “Einbüge” – a sign that here too Schubert chose his texts carefully. In his manuscript the texts are in a different order from the one Heine had chosen for his cycle. Since then, several attempts have been made to restore to the songs to the order followed by Heine. However, since the composer chose only six of the 88 Heimkehr poems continuously numbered by the poet, there is no unity of content that has to be restored, so Schubert’s ordering should be preserved, as is the case in this recording.
The tone of the Heine Lieder is considerably different from that of the seven relatively conventional Rellstab Lieder. They are in fact small “moments musicaux,” vivid snapshots that neverthless, in a small space, offer extreme contrasts. In the last “picture,” Doppelgänger, after a recitative opening section, the voice climbs three times from pp or p to fff, before dying away in ppp. The same occurs, albeit in a milder form, in the first song of the group, Der Atlas. They are astounding studies, compositional experiments of a singular nature: thus Ihr Bild is characterised by an alternation between solo and choir of the kind familiar from medieval monophony: the solo voice begins, accompanied by the piano in unison, then, in the answering phrase, the texture broadens out to polyphony (full, choralelike texture in the piano). Another example is Der Doppelgänger, which begins with a thrice-repeated phrase in the bass in the manner of a chaconne, the head motive of which (b – a sharp – d’ – c sharp’) is taken from the „Ag-nus De-i“ of the Mass in E flat major. This motive is stated six times in all, thereby referring to the apparition that so frightens the protagonist. In Die Stadt Schubert spreads a curtain of fog that obscures our view of the tonality (C minor). The chords that prevail in the prelude and postlude and also in the whole central section (“a damp gust of wind eddies”), are strange for C minor and refer more to G minor. Likewise in the chords the note c is preserved; with it the Lied both begins and ends. The only other Lieder that Schubert offered a publisher were the Heine group from Schwanengesang: on 2 October he wrote to an Heinrich Albert Probst in Leipzig: “... [Apart from the three last piano sonatas and the String Quintet] I have also set several Lieder by Heine of Hamburg, which were extraordinarily well liked here ...” – a sign that he indeed regarded these Lieder as an autonomous group.

As stated above, a single Lied by Johann Gabriel Seidl was added by Schubert’s brother to the two Schwanengesang groups: Die Taubenpost. This is perhaps Schubert’s last Lied, possibly even his last complete composition of all (unless this applies to Der Hirt auf dem Felsen – both Lieder carry the same date: October 1828). The Viennese poet Gabriel Seidl, who was a friend of Schubert, was the source of a whole series of poetic texts that Schubert set to music between 1826 and 1828; some of these were solo Lieder, some were polyphonic songs. This is remarkable, since on 4 August 1828 – at about the time that he was working on one the Rellstab and Heine Lieder – Schubert wrote to the poet: “Dear Herr Gabriel! [this unusual appellation, using the first name, shows that the two men were on a familiar footing] In this letter I am sending back these poems, in which I can discover nothing poetical or useful for music.” That this verdict applied only to the poems that had presumably had been sent directly to Schubert, and not to Seidl’s poetry as a whole, can be seen from the fact that Schubert in the past sent his Seidl settings en bloc to the publisher, in volumes containing only Lieder on texts by Seidl (Op. 80, 95, 105); one of these, Op. 95, was dedicated to the poet. This volume – a Lieder group to which Schubert or his publisher gave the title Refrain-Lieder – plays a particular role in this: Thaddäus Weigl, the publisher, announced the Lieder in a advertisement: “For a long time the public has cherished the wish to receive [from Schubert] a composition with cheerful, comic content.” This wish had been granted by the composer in the four songs, which are “in part genuinely comical, in part bear the character of naivety and humour.” In fact the “comic” Lieder are no. 1 (Die Unterscheidung) and no. 3 (Die Männer sind méchant!), Lieder in which young girls mirror the conventions of society. On the contrary the two Lieder recorded here are neither “naïve” nor “humorous” – though both, like the two young girls’ songs, are structured with a refrain, “Bei dir allein” in no. 2 and “doch gewiss ein Glück” in no. 4. The groups of songs op. 105 and op. 80 document – as do many others – Schubert's predilection also for endowing a central thematic focus to songs already connected by assignment to a single poet. In op.105 this theme is "Sehnsucht" – longing – (indeed the title of the fourth song), which is caught within a contradiction – "Widerspruch" – (the title of the first song in the group) between an internally directed and an externally directed longing. Thus the singer in Am Fenster (At the Window) turns to the "lieben Mauern, hold und traut, die ihr mich kühl umschließt" (you dear walls, sweet and trusted, that cool enclose me), but then thinks "Du Mauer wähnst mich trüb wie einst, das ist die stille Freud; wenn du vom Mondlicht widerscheinst, wird mir die Brust so weit" (You walls suppose me as cheerless as before – but this is a tranquil joy; when you shine from moonlight, my heart swells). In contrast, op. 80 is a series of songs of a wanderer through the night. In the first song the singer (he actually does wander: a continual pacing rhythm moves him forwards) calls on the moon sailing through the endless sky to be his companion. The second song refers to Das Zügenglöcklein (The Passing Bell) (expressed by the piano in the incessantly struck octaves E flat' – E flat''), the death knell reconciling the "glad pilgrim to the world" – as so often in Romanticism, "night" is here a night of death. In the third song the Wanderer recognises at last whither the moon is leading him– it shines on "the little hut" in which "my beloved friend" is resting. The Wanderer scarcely moves in this song; he is rapt in the nocturnal vision, and the piano evokes for us the shimmer of the stars and of the moon, and the trembling of his restless heart .

Of the Lieder that Schubert was still able to hand to the publisher himself in the second half of 1828, eight are from Seidl alone. As such, these too may be counted as part of Schubert’s Schwanengesänge.