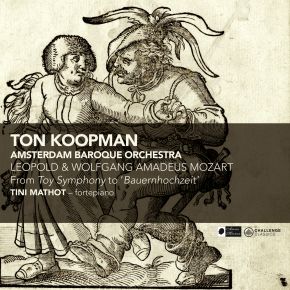 From Toy Symphony to Bauernhochzeit

Leopold gave his children musical tuition and guidance, also encouraging composition from an early age. Wolfgang wrote his first compositions – an Andante and an Allegro for piano – at the age of five. Leopold mounted an elaborate publicity campaign in order to win renown for his prodigious children throughout Europe. The younger they were the greater the sensation. Thus, setting off with them, Leopold visited the musical centres of the time. In 1764 the family arrived in London, where Wolfgang composed his first Symphony in E flat K 16. Undoubtedly assisted by his father and influenced by Johann Christian Bach. His initial symphonies are clearly experiments, or exercises in a new genre, but they are nevertheless well-crafted, fullfledged  mniature works. In the second movement a motive appears that later serves as the foundation for the Symphony no. 41, the ‘Jupiter’ (K 551). At the same tour, during a stay in Holland, Gallimathias Musicum  was composed for the festive inauguration of Willem V as Stadhouder of the Republic of the Seven United Netherlands. In the period that Wolfgang married his beloved Constanze without his father’s blessing he composed the Twelve variations on the French folk tune "Ah, vous dirai-je, maman" K 265. The melody used to be and still is the setting for nursery rhymes across Europe (e.g. Twinkle twinkle little star, Morgen kommt der Weihnachtsmann (D) and Altijd is Kortjakje ziek (NL)). Of the 15 sets of variations that Wolfgang wrote, the ones on ‘Twinkle twinkle little star’ are by far the best  known. Well past the experimenting stage, they are rather an elaborate display of what the composer was then able to do with such a simple melody. Each variation has its own character and style, while the original melody remains audible throughout.

Leopold Mozart was a composer of a entirely different calibre. His conscious aim was to write simple, undemanding music. In his time ‘the ordinary man’ had started becoming interested in composed music. Since the level of the amateurs was not such that they were able to perform the virtuosic music of the court ensembles, a demand rose for more simple music. Leopold filled this gap. Leopold often used uncommon instruments to give additional colour to his music. An example is Die Bauernhochzeit, which draws on a set of bagpipes. In addition, the musicians have to cheer and clap. Leopold also supplemented many of his scores with simple indications for performance. A typical example of the above is Cassatio ex G 'mit der Kindersinfonie'. The use of simple children’s instruments and toys that made sounds were then in fashion. Although the piece radiates a childlike simplicity, it is not so easy to play. Many of the children’s instruments are only able to produce one or two notes, and for every additional note another instrument was necessary.

This is a wonderful recording, how does it come that the final part of the Kindersinfonie is missing [Presto]? Yet on allmusic it shows: http://www.allmusic.com/album/leopold-wolfgang-amadeus-mozart-from-toy-symphony-to-bauernhochzeit-mw0001425411 Is there an update?