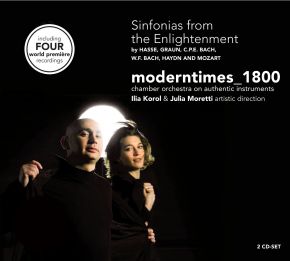 The Age of Enlightenment was the epoch that Frederick II ruled over Prussia. This monarch was also musician and composer and gathered Germany’s musical elite at his court. In the second half of the 18th century out of the gallant and reason-driven ideas of the philosophical and literary Enlightenment emerged a movement of sensibility, known as  ‘Sturm und Drang’ and this transition is most clearly marked by composers as C.Ph.E. Bach, the Graun and Benda bro’s and J.A.Hasse, all composers closely related to the Prussian court of Frederick, while in Vienna still was blowing a more traditional wind. Also the musically independent Joseph Haydn couldn’t avoid in some of his symphonies the influence of this new trend. Enlightened contemporaries considered all these musicians who dedicated their creativity to the new sound as the avant-garde. This CD actually includes the first recording ever of the symphonies by Hasse, Graun and Carl Philipp.