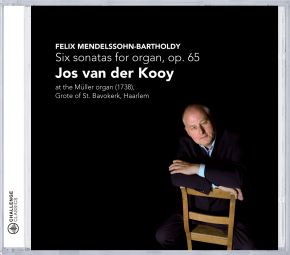 They represent milestones in organ literature; the organ sonatas by Felix   Mendelssohn. Subtleness, lyricism and emotion are characteristic of this kind of music, which excels in beautiful form and authentic content.

The sonatas were published in London, Leipzig and Milan on 15 September 1845. A fourth edition appeared in Paris at the change of year 1845/46. The opus was dedicated to dr. F.  Schlemmer, his wife Cécile Jeanrenaud’s cousin from Frankfort am Main. During a holiday in Frankfort am Main in July 1844, he started composing the sonatas. Existing pieces were incorporated in the sonatas, while newly composed pieces were completed. Already at his parental home in Berlin, Mendelssohn was brought into contact with the music of Bach. On 11 March 1829, he performed Bach’s St. Mat- thew Passion for the first time after the death of the composer. As a child he had followed some organ lessons. As from 1830, he fanatically studied organ music with the objective to perform organ music at concerts. His programmes included works by Bach and improvisations. His performances of Bach’s organ works at St. Paul’s Cathedral in London were sensational. On 6 August 1840, he performed a demanding Bach programme on the organ of St Thomas Church at Leipzig. The proceeds were to fund a monument for Bach that would be erected in 1843.