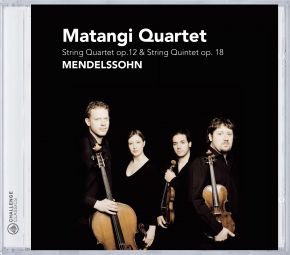 The early 19th century was a turbulent time for Germany’s Jewish population. They had few civil rights to speak of and lived in a constant state of un-certainty. They would enjoy long periods of relative calm, but then all of a sudden the fury of the people would engulf them. Even if a Jew did manage to survive such a pogrom, the chances were great that he would have lost all of his belongings. It was for this reason that Jewish families placed such an emphasis on the development of intellectual and artistic skills. At least they could not be deprived of these, if forced to relocate. Unfortunately, however, public schools were forbidden territory for the Jews. As Felix Mendelssohn’s father was a man of considerable financial means, he was in the happy position of being able to engage outstanding private tutors for his children. They received an extremely thorough education. The children got up at five o’clock in the morning to do their homework and study: Latin, Greek, mathematics, history, geography, English, French and drawing. They also played a great deal of sport. And then there were the music lessons: piano, singing, composition and violin. Although the piano was Felix’s main instrument, he also made astonishingly rapid progress on the violin and viola. This is evidenced by the degree of difficulty of a violin sonata in F major that he composed for his sister Fanny and himself at the age of eleven.

What was truly striking was that Felix succeeded in maintaining this technical level of accomplishment on the violin and viola for the rest of his life without having to practice. As his later friend and colleague Ferdinand Hiller wrote: For a whole year he did not touch a stringed instrument, however, if he wanted to play, he could do so – and this was also the case where most other things were concerned. Felix took violin lessons from Eduard Rietz. When he was eleven, Rietz thought it was time for him to play in a string quartet. In this way, Felix became well acquainted with works by Haydn and Mozart. At the age of fourteen he composed his first quartet, in which he still heavily relied on their example. Two years later, he composed his masterly octet opus 20 and dedicated it to Rietz, with whom he had meanwhile developed a close friendship. The first violin part of this octet clearly reflects the virtuosity of Rietz’s playing. Felix was captivated by Beethoven’s quartets. Small wonder, then, that his following quartet opus 13 – composed in 1827, the year of Beethoven’s death – is replete with Beethoven quotations. For the rest, the unruly nature of this work even sparked off an argument between Felix and his father.

Opus numbers often give rise to confusion; the string quartet in E flat major featured on this CD is known as opus 12. However, it is actually his third quartet, composed two years after opus 13. Opus 12 is a less tempestuous work; however, it also opens with a slow introduction, which calls to mind Beethoven’s Harp Quartet opus 74. By far the bestknown movement is the Canzonetta, which is also frequently performed as an independent work. The quartet is cyclic: themes heard in previous movements make their reappearance in the finale. Felix composed most of opus 12 during a long and successful visit to England. He inscribed the letters BP at the beginning of the work. These are the initials of Betty Pistor, a friend of his sister’s. Three years earlier, a romance had begun to blossom between Felix and Betty, until her father forbade them to see each other. Probably anti-Semitism played a part in this. Gossip was circulating about Betty, who loves music so much... and Jews. Evidently, though, she was still very much in Felix’s thoughts. In the meantime she had become engaged to someone else and thirty years were to pass before someone pointed out to her Felix’s dedication of this work.

Felix composed his quintet opus 18 at the age of seventeen. The work is all too frequently overlooked, having been written so soon after the marvellous octet. The Scherzo is of the featherlight variety, for which Mendelssohn seemed to have taken out a patent. Felix’s admiration for his idol Beethoven is once again evident in the finale. The opening of this movement displays clear similarities with the final movement of Beethoven’s quartet opus 18 no 1. The second movement, Intermezzo, was composed at a later date. Mendelssohn was dissatisfied with the original menuet and a tragic event provided the final impetus for him to replace this movement. In 1832 Felix was in Paris. He enjoyed considerably less success in this city than in London. He was revolted by the superficial taste of the Parisian public, who came in droves to hear the – in Felix’s words – cheap operas by Meyerbeer. There he received news that his violin teacher and friend Rietz had died of tuberculosis at the tender age of thirty. It was a severe blow, for Felix and he had experienced and undertaken so many things together, for example, the sensational and trendsetting first performance of Bach’s St. Matthew Passion in eighty years.

Full of sorrow, Felix wrote in a letter: A new chapter of my life has begun, but I don’t have a title for it yet. He also composed this intermezzo in commemoration of Rietz, giving it the title Nachruf, or in memoriam.