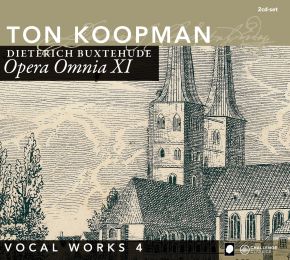 Dieterich Buxtehude’s historical significance has been primarily defined by his organ works which represent in many ways the culmination of 17th century organ music. The vocal compositions of the distinguished Lübeck master do not show the unparalleled degree of innovation in terms of stylistic design and daring harmonic features that can be found in the organ music. At the same time, the substantial repertoire of his vocal art ranks among the most attractive ones in the later 17th century and forms a climactic point in Lutheran church music between Heinrich Schütz and Johann Sebastian Bach. The diversified body of Buxtehude’s vocal compositions reflects the rich tradition that emerged in the central and northern regions of Germany after the end of the Thirty Years War, a tradition considerably fueled by strong Italian influences of the post-Monteverdi generation.

Buxtehude composed the majority of his vocal church music not for worship services at St. Mary’s Church in Lübeck, where he served as organist. Providing vocal music for liturgical purposes was the cantor’s and not the organist’s function, for the two positions were kept separate in most large churches of Northern Germany. A number of Buxtehude’s vocal works were commissioned by his colleague and friend, Gustav Düben, capellmeister at the Royal Swedish Court and organist of the German Church in Stockholm. All of the Swedish language but also some German works were written for Stockholm. However, most of Buxtehude’s vocal output was apparently composed for the annual series of public evening concerts at St. Mary’s Church, the so-called Abendmusiken, which took place on weekends during the months of November and December, sometimes continuing even beyond Christmas.

In this regard, Buxtehude continued a tradition founded by his predecessor, Franz Tunder, that provided the organist with his own venue for composing and performing vocal music. Buxtehude’s Abendmusiken became particularly famous though the large-scale oratorios he produced for them. The young Handel and Bach, for example, traveled to Lübeck in order to experience these special musical events. Unfortunately, the music for none of these influential works survived; only printed texts for some of the oratorios are extant today. Recent research, however, turned up evidence that not only oratorios but also shorter vocal works with both German and Latin texts were performed at the Abendmusiken. Hence, the programs for Buxtehude’s winter series of church music concerts may well have resembled the kind of collection gathered in this album – pieces of varying texts, styles, genres, lengths, formats, and scorings.